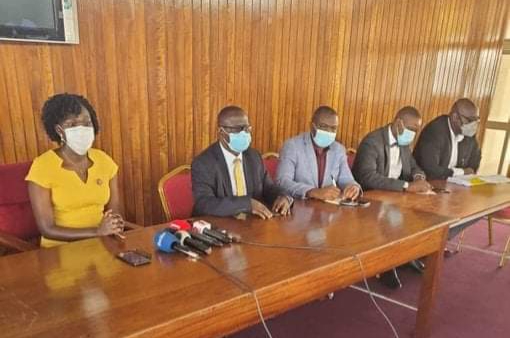 A section of NRM Members of Parliament who were miserably trounced in the party primaries have this morning announced a new umbrella dubbed ‘NRM cadres’ under which they will execute their duties in the looming 2021 polls.

In a Wednesday morning presser held at parliament which our sources learnt was arranged by the Koboko municipality outgoing legislator, Evelyn Anite, the NRM losers league announced that they would not interfere with the party activities but maintained they would help mobilize for president Museveni whom they expect to reward them with positions. Usually at the end of every general elections, the ruling NRM party loses an average of about 100 legislators but majority bounce back in different government roles. Museveni never fully sacrifices his cadres as he fills them in different slots like the RDC offices, diplomatic and consul duties. For instance in 2016, when the then Minister of Defence, Dr. Crispus Kiyonga lost the Bukonzo West MP seat, Museveni appointed him as Uganda’s ambassador to Beijing while Betty Kamya who had lost Rubaga North bounced back as a cabinet minister.

Sources close to Anite’s arrangements say the 34 year old politician cannot imagine life outside parliament. “Much as she claims that she is contented, she has never recovered from her loss to Dr. Ayume. She lied that she wants to settle in her marriage and have a third child with her husband but the truth is, she still wants to be a Minister,” says an aide to Anite. “Her plan is to rally her fellows who lost the primaries and meet Museveni to agree on their duties in the next Government,” she adds.