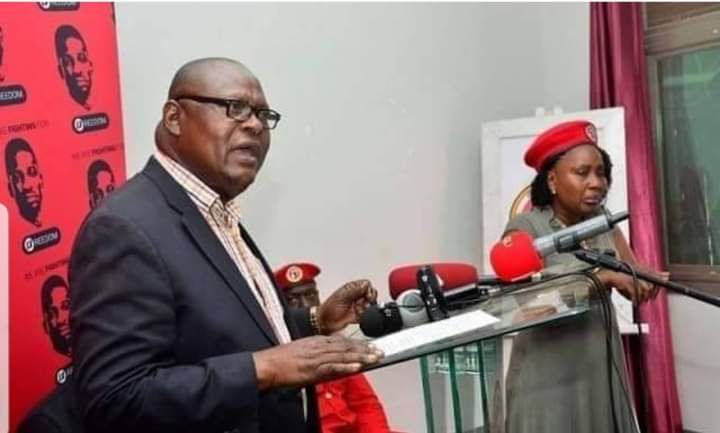 Mr. Nkonge Kibalama has just denounced ever making any transaction and transition of the National Unity and Reconciliation Party which morphed to National Unity Platform party. Nkonge says the current leadership has deviated from the terms of the agreement they had with the People Power movement.

Speaking in a footage which is gaining public traction online, Nkonge says the transaction was illegitimate and was only attended by 41 members which prompted disgruntled members to go to court. “The displeased members went to court and the matter is still pending,” Nkonge says.

“These young men have not fulfilled the expectations of our terms. We formed NUP before even Kyagulanyi came on board. We have operated for over 14 years,” he adds.

He also accuses the current leadership of failing to fulfill the financial transaction worth $4 million. “The financial bit would not be loud if the other side fulfilled its part. If we didn’t bring in the People Power group, the party would still move on well,” Nkonge says.

Asiimwe Paul, 39, who served as the Secretary General between 2017-2019 says he was part of the transition process. “I was the custodian of the party documents and records. We were approached by the People Power team which wanted to work with us since they weren’t registered as an established political party,” he says. “They came with promises but things are not moving well. They deviated from the MoU we signed. I tried to guide how we’re supposed to be moving but to no yield,” he says.

“We are taking up a decision to retain our party because we didn’t sell it to them as claimed. We don’t have an agreement to that effect. They can move with their People Power, and we stay with our party,” he fumes.

“We want to manage this in a way that we don’t show up. We want to be civil. We want to run our party according to the objectives to which it was formed,” Asiimwe further reveals.

This comes just a day after Mr. Kibalama’s residence was raided on Wednesday night by a joint security operation. Many NUP supporters say Kibalama and his team are making these utterances on gun point. “Only a fool cannot see that these two are not speaking with a sober mind. They are being forced to say what they are saying,” says one of the NUP supporters.