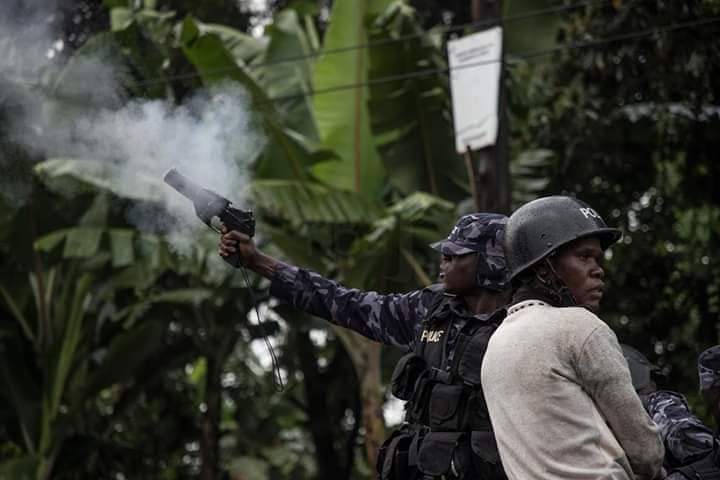 The battle between the Uganda Police Force and National Unity Platform party supporters has intensified this morning after a raid on the party headquarters in Kamwokya. The raid follows a peaceful protest where people this morning demanded for the arrest of Charles Olim alias Sipapa who has turned Kamwokya into a living hell with his endless armed raids that could cost people lives.

Streaming live on our official page Ekyooto International, police officers are seen in a cat and mouse chase with the NUP supporters. Bullets and teargas are also being fired to demobilize the swelling masses and several running battles are also scenic. Our correspondent on ground says some arrests have been made. “I cannot ascertain the exact motive behind this raid but I know it is just a way if intimidating our supporters,” says Ssenyonjo Ashraf one of the NUP supporters. “Police just want to scare away our people but we shall not fear anything,” he adds.

This raid comes a day after the same police had dispatched a team if detectives to investigate the Tuesday shooting at the NUP offices. Bullet shells were retrieved as exhibits and photographs of the bullet riddled NUP gate were also taken to aid the investigations. Police say they have also issued summons to city socialite, Charles Olim largely famed as Sipapa for interrogation. But our credible sources at Kiira Road police station say Sipapa has not turned up for the said interrogation. “I have been on duty 24/7 and I’ve not even seen a mere shadow of Mr. Olim,” says a police source. “In case he turns up, I will be letting you know,” he adds as he maintains he doesn’t want to be put on record for fear of reprisals from his seniors.