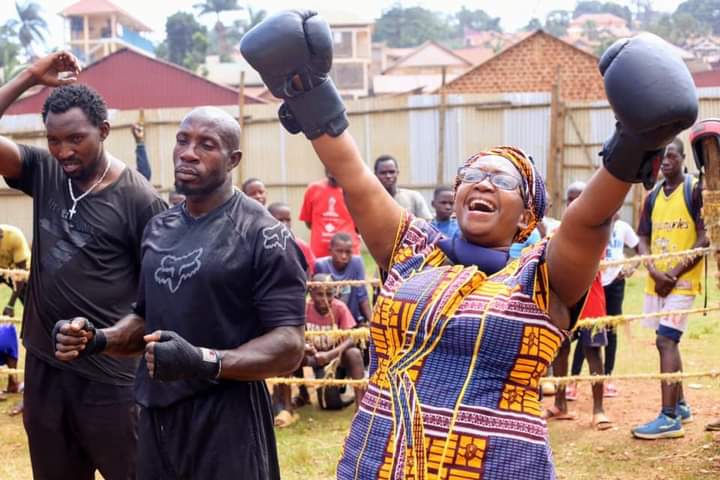 Renowned queer rights activist and Kampala woman MP aspirant, Dr. Stella Nyanzi has this evening been arrested in Busia as she returned from Kenya where she has been for the entire week.

According to reports, Nyanzi and her crew were arrested for violating covid guidelines having ‘illegally’ crossed into neighbouring Kenya and yet the president had directed a closure of border points. Her arrest comes just days after People Power musician, Ziza Bafana was arrested in a similar style as he returned from Tanzania.

Nyanzi in a lengthy Facebook post gives her account of how police and UPDF afflicted physical harm on her as they forcibly blocked her vehicle which she had left at a petrol station in Busia town. Below is Stella’s account of the arrest scene;

I am back in Uganda. After getting into my country with my political assistant, my photographer and my driver, we crossed the Busia border and went to collect our car that was parked at the Shell Petrol Station.

I quickly got into the car. A man dressed in layer, intercepted us, refused my team to enter the car, threatened to shoot at us if we drove the car away and then blocked our exit with his car (number plate UBF398P). He is armed with a pistol in the pockets of his shorts. He is threatening us with arrest.

I wonder why these military boys think that they can bully us in our country. Yoweri Museveni crossed our border and went to another country. Nothing was done to him by men with guns upon entry. What have we done wrong?

Update after thirty minutes:
A car full of big men with stomachs in layer, thin black armed LDUs carrying AK47s and four military policemen wearing military camouflage have now surrounded my car. They are shouting at me to get out of the car. I have shouted back at them to ask what I have done wrong. I reminded them that I am a Ugandan in Uganda and that this is not a crime. They are accusing me of being a Ugandan who has re-entered Uganda from Kenya. Why didn’t they intercept dictator Yoweri Museveni and accuse him of re-entering Uganda from Tanzania earlier this week?

Second update:
The armed men have forced my car boot open. They are ordering me to drive with them to the police station in Busia. I have explained to them that I do not drive because of my poor health. I have also told them to bring a police woman with her identification, wearing a mask, sanitized hands and that she should practice social distance when she is with me. They shouted back at me and are consulting among themselves. Was dictator Museveni threatened and accosted by armed men who broke into his car when he returned to Uganda from Tanzania earlier this week? Why should a throng of unidentified men with guns come without a single policewoman to arrest me? Why should they bring all their crooked penises armed with all sorts of guns to arrest a single vagina? What crime have I committed? I am a Ugandan in Uganda. Is this a crime?