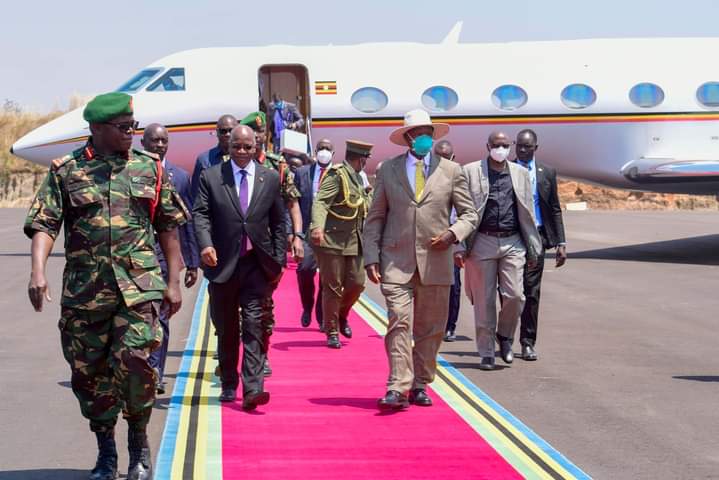 Last Sunday, the president of Uganda, H.E Gen. Yoweri Kaguta Museveni with the stroke of a pen struck a mega $3.5 billion oil pipeline project with his Tanzanian counterpart, H.E John Pombe Magufuli, something that left many Kenyans feeling abandoned and sidelined. According to multiple analyses in Kenyan papers, the oil pipeline project appears to have been a collusion between the two East African countries to outpace their economically leading Kenyan counterpart.

SEE ALSO: “My oil money will not be for nyam nyam,” Museveni says

Defiant Magufuli demonstrates to M7 that he is in control when it gets to Covid.

The Kenyan media has for this entire week been awash with critical analyses condemning and decrying Mr. Museveni for what they termed as ‘stabbing them in the back’. Although Uganda’s plan to use the Tanzanian route was announced 4 years ago in 2016, it is not a thing that Kenyans have been comfortable with given the fact that a route through their country would even be cheaper and convenient for landlocked Uganda. The Kenyans thought Uganda would choose using Lamu rather than Tanzania’s Tanga port.

The $3.5 billion (Kshs 350 billion) 1,445 kilometer pipeline will be too costly for Uganda according to Kenyan media reports. Although Uganda attributes its decision to opt for Tanzania on the favourable land policy whereby the state constitutionally own chunks of land unlike in Kenya where compensating occupants would take an estimate of 24 months to be complete.

Ugandan veteran journalist, Charles Onyango Obbo in a piece published with Nation Beta, an online publication explains that Museveni’s decision to use the Tanzanian route is far fetched and bears political motives. He explains that the pipeline route is to cross through Museveni’s political strongholds. “The oil pipeline to Tanzania runs in western Uganda, through regions that are staunchly pro-Museveni. As he heads into the sunset of his rule, there is less political risk to his regime and, therefore, the pipeline in these strongholds than through the north eastern route to Kenya, which is more politically contested,” Obbo writes. His argument holds water given the fact that the Western Ugandan districts have been sworn strongholds of the NRM regime as per the reflection of the EC results in all the preceding general elections. Besides, Museveni has on several occasions mentioned the oil to be his own. “This is my oil,” Museveni usually states.