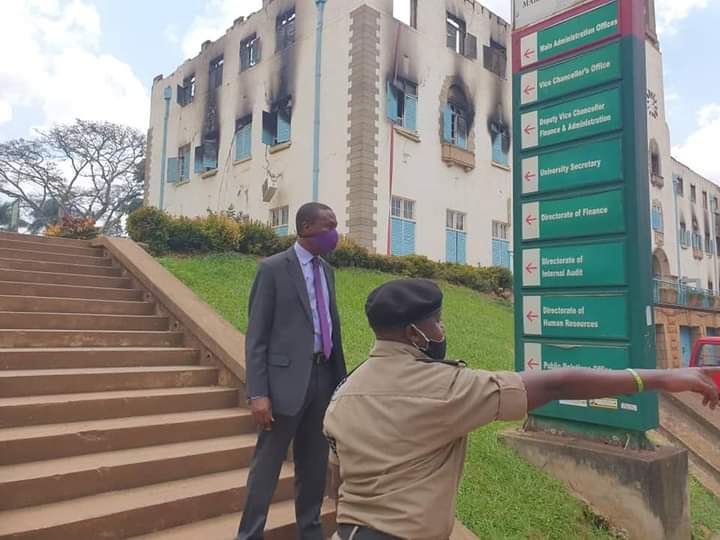 The intending Kampala city Lord Mayor under the opposition NUP ticket, Al Hajj Latiff Ssebaggala Ssengendo was today denied access to the remains of the Makerere university main building despite being an alumnus of this mighty alma mater.

Bobi Wine calls for an independent investigation into Makerere fire

Latiff who arrived in the early morning hours was denied reaching the scene for donning in the red beret identical to the NUP party. He was later asked to drive out of the university without fail or face an arrest. “I have been denied access. I could not get anywhere close to the scene and police is not telling me why they are chasing me away,” he told the press. “I don’t think what police just did is the right thing,” he added.

However, Rtd. Maj. Gen. Mugisha Muntu of the Alliance for National Transformation party was allowed access to the same when he arrived moments after Latiff was sent away. Muntu, an alumnus of the same university like Latiff was treated like a VIP and even granted a police escort who toured him around the ruins of the main building. In his speech, Muntu lashed out at the government for overspending on irrelevant machinery to quell and disperse lawful opposition gatherings and yet they cannot invest in essential sectors like the fire service.

Police today confirmed that they have arrested two of their own personnel who had been deployed to man the main building but were not present on the scene at the time of the tragic fire. “We have arrested the two to face negligence of duty charges but this should not divert us from the actual cause of the fire. We appeal to the Ministry of works to send us some experienced engineers to aid our investigations,” stated CID boss Twiine.

In today’s remarks, the Makerere University Vice Chancellor, Prof. Barnabas Nawangwe said they are to embark on the restoration of the signature building in its original designs. “We have the original plan in our hands. We retrieved it 30 years back. It will guide our refurbishment,” he said. “However the costs might be heftier than we estimated. The government valuer put the building at UGX 15.7 billion but I’m seeing it costing more than that,” he added. Expert engineers and architects however say the building may roughly take about 3 years to be reinstated to its original state and this may require keen planning and attention to the materials used by the past planners.