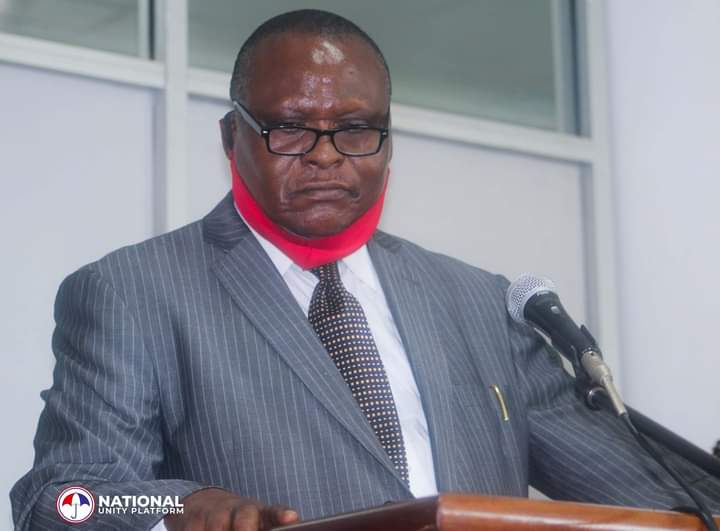 The 76 year old panicking despot, Gen. Yoweri Kaguta Museveni has instructed former NURP president, Moses Nkonge Kibalama to hold an emergency presser disowning all the confessions he made before court.

A visibly fatigued Kibalama is seen in a press conference ongoing live at a high end hotel in Kampala. Important to recall is the fact that he was whisked away by the UPDF officers immediately as soon as the court ended.

Moments before Kibalama’s disclaimer presser, the NUP spokesperson, Joel Ssenyonyi in a post explained that they had already landed on that plot way before it even ensued. Ssenyonyi also reveals a span of plans the regime has for all the prominent NUP party leaders and supporters whereby the regime is to intensify its espionage and plant spy cameras on residencies of the marked members.

Mzee Moses Nkonge Kibalama, the former NUP party President cried in court admitting he’s under pressure from state security to antagonise the new leadership of NUP.
Security picked him from his home in Buwambo and took him to the Chief of Defence Forces David Muhoozi, who asked him why he handed over leadership to Hon Kyagulanyi.
Looks like the army chief is the one who supervises political parties nowadays! A shortwhile ago, we learnt that security operatives have ordered Mzee Kibalama to hold a press conference later today at Mossa Courts apartments to retract everything he said in court, they don’t know that evidence has already been admitted in court. We’ve also learnt that the state is planning to plant certain items at our offices, plus homes of NUP leaders and lawyers, just like they planted guns in Hon Kyagulanyi’s hotel room in Arua.
We know all their machinations, but they won’t work. The state is showing so much fear, but we shall overcome!!