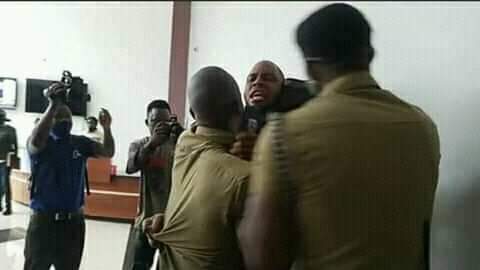 News jetting in indicates that the National Unity Platform party supporter who today featured in a widely trending social media clip where he is seen being beaten by khaki dressed police officers, has been abducted.

Our reporter learnt that the NUP supporter is called Kavuma Jamushid, a coordinatir of the Uganda Whistle Blower’s Association and a sworn diehard of Robert Kyagulanyi Ssentamu.

He was battered as he tried to access court premises this morning. A yet to be named police officer is seen holding Kavuma by the waist before he overwhelms him to the ground. Another NUP youth is seen trying to separate the fist fight before he is also whisked away by high ranking police personnel.

We have been tipped that Kavuma is apparently missing after being abducted by the same police officers who according to eye witnesses accounts drove him in a caged police patrol vehicle. “We saw him being bundled into one of the police patrol which has a caged cell. Journalists were barred from capturing his arrest moment,” one of the witnesses told this site.

The Western youth coordinator and learned lawyer says three of the NUP youths are under state custody according to the intelligence they’ve received. “We’re safely back from court. Butv3 or our comrades, including Kavuma Jamushid who appears in this photo, have been beaten up and whisked off to an unknown destination when they tried to access court proceedings. I have no reason to think that they’re being tortured at this very moment,” Saasi writes on Facebook.

Several other NUP supporters have embraced an online cyber campaign to compel the regime authorities to spit their detained colleagues. Our efforts to know the other two colleagues whom Saasi is talking about turned fruitless as no individual could ascertain their identifies.