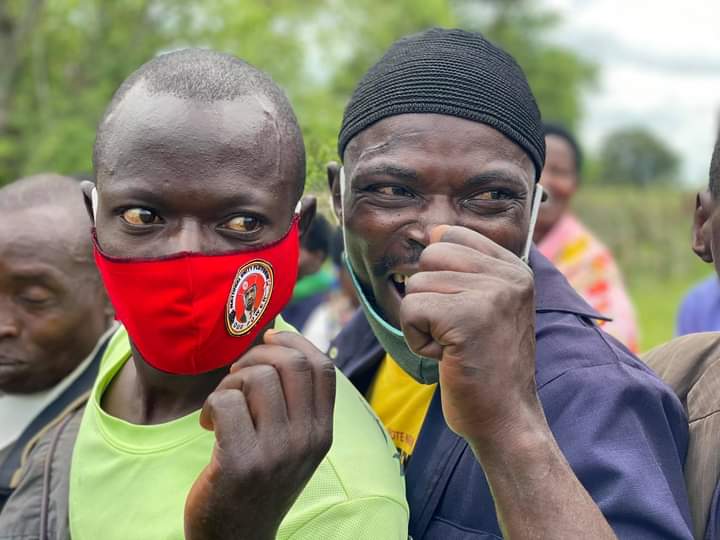 The disputed Mawogola county elections are apparently ensuing calmly amid tight security manned by both the UPDF and Uganda police force. The naysayers have always claimed that the NUP is only concentrated in the central Buganda regions of urban Kampala, Mukono, Mityana among others but what is happening now in Ssembabule corroborates with the NUP party slogan that ‘NUP is everywhere’.

It seems even the ‘Majje girl’, Hon. Evelyn Anite who was trounced in Koboko could have been right when she accused the NUP of invading and infiltrating the NRM voters’ register. In the queues, photojournalists have captured some NUP supporters donned in red berets and Bobi Wine face masks turning up to poll leaving onlookers perplexed.

Away from that credible reports indicate that the Deputy IGP, Mzee Sabiiti has pitched camp in Ssembabule where he has been for a full week studying the chaotic environment that has seen pockets of violence ensue to the point that some of supporters of rivalling sides have lost lives. Police and UPDF have been deployed in the 9 counties and officers have been ordered to arrest anyone who initiates violence. Dr. Tanga Odoi who is also in the area has asked voters to keep calm and turn up with their national IDs. He has asked police to send away any voters that turn up drunk. He also warned Kuteesa’s daughter, Shartis Musherure and her counterpart Aine Sodo Kaguta against championing violence in case one of them is defeated.