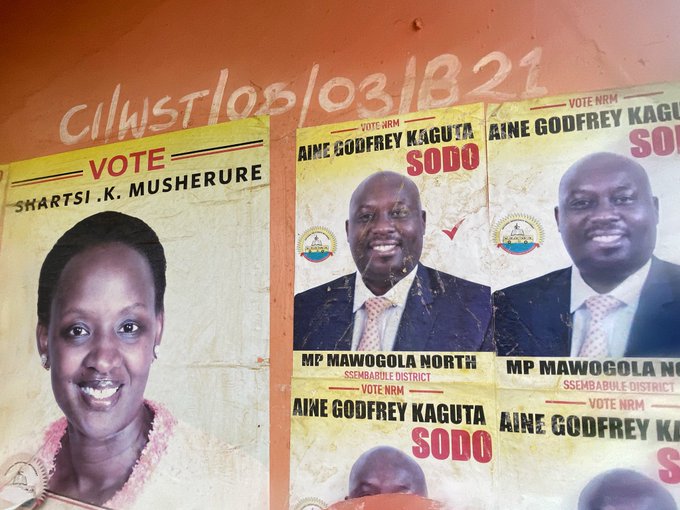 Whereas many anticipated a replica of the 1980 elections where DP’s Sam Kuteesa floored UPM’s Kaguta Museveni, it has been a different version of the storyline after the descendant of Kaguta instead overrun Kuteesa’s daughter. The prayer of the deceased man tortured by Kuteesa’s bodyguards could have instead worked in favour of Aine Kaguta.

SEE ALSO: Museveni’s secret meeting with the Kuteesas postponed as Shartis declines to withdraw from poll

Aine Sodo Kaguta has defeated Shartis Musherure with a small margin in a hotly contested Mawogola North NRM flag. From the final results retrieved by our reporter, Aine polled 17,775 (46.3%) while Shartis Musherure garnered just 16,155 (42.17%). The other contender, Samson Kisekka polled only 4415 of the total vote.

Ssembabule today turned a battlefront for the warring Shartis and Sodo camps. The DIGP Sabiiti Mzee had to pitch camp in the district to put an end to politically engineered abductions and murders that had taken trend in this particular election. The NRM party Electoral Commission boss, Tanga Odoi was seen at most of the polling stations trying to engage the voters in a quest to restrain them from indulging in large scale violence.

Results from Mawogola west where the famous Anifa Kawooya is battling with Joseph Ssekitoleko remain pending as the tallying ensues. We shall update the story soon as we get the final tally.