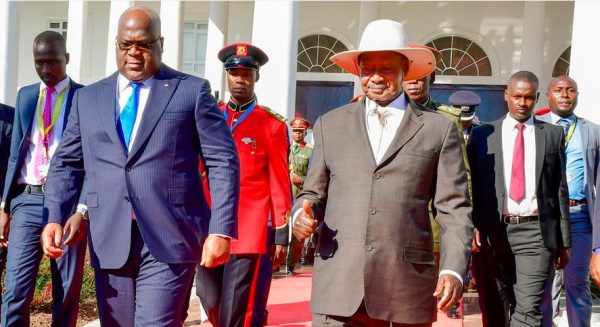 Cabinet on Tuesday resolved on a move to establish a 223 km tarmacked road stretch inside the Eastern territory of the Democratic Republic of Congo.

SEE ALSO: Museveni can’t hand over to Bobi before having his oil share-Nankbirwa

The government spokesperson, Ofwono Opondo told journalists on Tuesday that Uganda had agreed to build a strategic road network in the DRC that would boost regional development and trade. “Cabinet approved the construction of the national road from Kasindi section at the border to Beni (80km) and the integration of the Beni-Butembo axis (54km) to the national road and the Bunagana (border) to Ruchuru-Goma road (89km) on grounds that the project will benefit the government and people of Uganda through economic interconnectivity,” Ofwono stated on Tuesday.

He further adds that the road stretch will nkt only help rehabilitate trade and development of the entire central African region but also help the regional troops respond to a string of insurgencies and rebel activities in the Easter DRC.

“The road network would provide improved security in the eastern DRC and increased trade and investment,” Opondo said.

The DRC has since time been Uganda’s area of strategic economic importance. In the 1990’s in his infancy days of power, an ambitious Gen. Yoweri Museveni ordered his troops into the territory of DRC in a mission that was guised as a confrontation with the fictious ADF rebels. The troops commanded by the late Maj. Gen. James Kazini and Salim Saleh reaped a fortune from the looted timber and gold. Museveni himself had a share of the loot. An international court of arbitration in a ruling told Uganda to pay DRC over $2 billion in reparations. Analysts say, Museveni wants to establish himself as a regional leader which is why he is embarking on constructing multimillion dollar projects in the neighbouring territories.

The road project was agreed between the two nations during last year’s bilateral talks between Museveni and Felix Tshisekedi. “Our countries have signed a raft of bilateral agreements but importantly we have stressed the need to improve the trade relations between Uganda and DR Congo,” Museveni said in 2019.