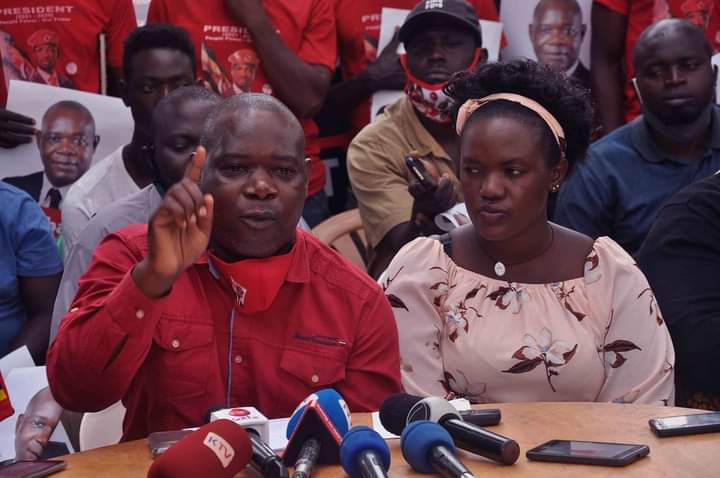 The Rubaga North incumbent MP, Moses Kasibante has lashed out at the Electoral vetting committee of the National Unity Platform party, a day after being denied the flag to bounce back on the same position he has occupied for two terms.

Speaking at a press conference he held this morning at Lubya hill in Rubaga, Kasibante, a member of the now dissolved DP Bloc accused his rival, Abubaker Kawalya of being a state implant in NUP. Kasibante claims that Kawalya’s ascension to KCCA speakership where he trounced FDC’s Doreen Nyanjura was planned by the state after an alleged alliance with NRM councillors. “Abubaker Kawalya is an agent of NRM and that is how he assumed the position of speakership at KCCA. He connived with NRM councillors to defeat the genuine opposition candidate, Nyanjura,” Kasibante claims. “When he wins Rubaga North, he will be declared a minister in the Museveni government of 2021-26,” Kasibante adds.

Regarding his next step, Kasibante says he is discussing with his agents to support his bid to return as an independent candidate. Rumours however say that he is receiving offers from the opposition FDC party where he was to earlier join with the Lord Mayor, Erias Lukwago in August before he would eventually decline and instead join Bobi Wine in NUP. Kasibante is the only member of the self proclaimed ‘Ssuubi’ group to be denied the NUP ticket. The committee findings established that he had lost track and grounds having been irregular in his constituency. The name Kawalya was more appealing to the electorate than Kasibante who had lost touch with the people.