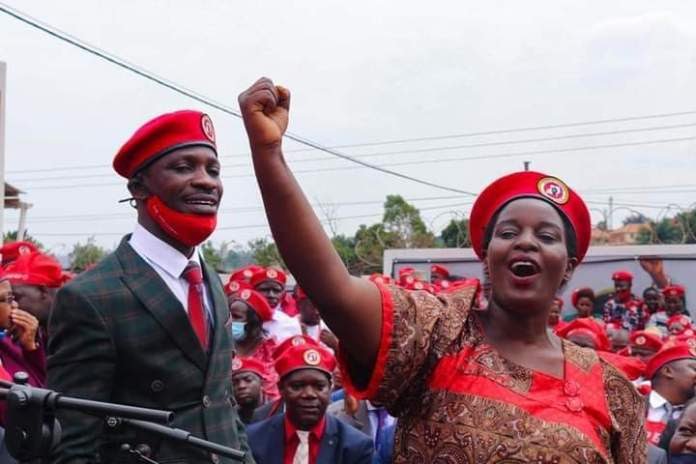 The National Unity Platform party Vice President for Western region, Jolly Mugisha has allayed fears that their principal, Robert Kyagulanyi Ssentamu alias Bobi Wine will not be allowed to visit the Western region.

This follows the recent list of NUP MP aspirants occupying all constituency from this region widely believed to be a Museveni stronghold. Kamukama says this development has sent shockwaves and panic in the ruling NRM party which is likely to collude with security forces to frustrate Kyagulanyi’s efforts to canvass for voted in the region. The state will likely rely on RDCs, RPCs and to police bosses to block Kyagulanyi from appearing in the Western region. Our sources have already learnt that Museveni is using local radio stations to trade propaganda against Bobi Wine whom they are labelling an ‘agent of white supremacy’. Radio presenters in the entire western districts have been paid to malice and trade harmful propaganda against the NUP principal. “The people are being told not to vote for any candidate wearing a beret. They are told the red colour means bloodshed and war,” says one of the regional journalists in Kamwengye district. “Radio programmes peddle a narrative that Kyagulanyi wants to bring war to Uganda. He wants it to be like Libya. That’s what people are told,” he adds. Over the weekend, we published a report on the UPDF chief of staff, Maj. Gen. Leopold Kyanja who was rallying ghetto youths in Bunyoro to cease listening to Bobi’s anti-government music.

The leaders of NUP party say despite the unleveled grounds, they have already found alternative ways of ensuring the campaigns happen. Ms. Mugisha says they will campaign for Kyagulanyi even in his absentia in case the state bars him from appearing in the west as planned. “We will canvass for votes even in Bobi’s absence,” she emphatically said today at her Mbarara residence.