Mao: I warned NUP about the DP Bloc 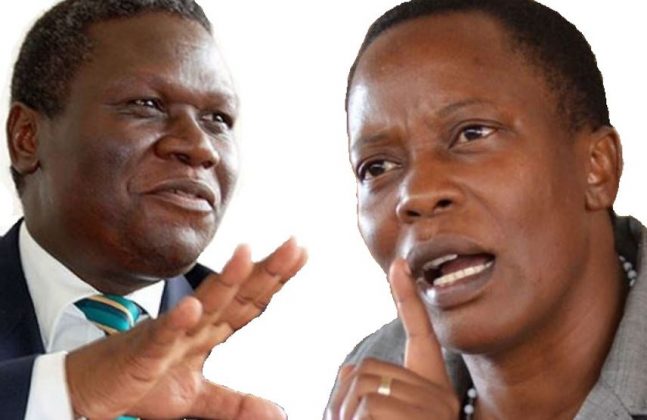 As the infights over the party endorsements within the NUP continue to intensify with more independents arising, the Democratic Party president, Norbert Mao has laughed at Bobi Wine for admitting what he described as ‘bad wood’ expecting it to light his fireplace. Mao, a seasoned critic of Nambooze last year defined her as watermelon. “We do not want watermelons in DP. Those who are only green outside but inside there are many colours; there is no room for watermelons in DP,” Mr Mao said last year.

While presiding over the 65th anniversary celebrations of the Democratic Party, Mao today mocked the NUP party over the ongoing infights over the party flag. Mao says he looked at Bobi Wine making a mistake of admitting Mukono municipality legislator Betty Nambooze Bakireke and her self styled DP Bloc.
“Some of these politicians have been troublesome. They are selfish and unfocused. People don’t know what we’ve been going through in the DP with Nambooze and group,” Mao told delegates. “If you can’t pick up the pieces, pick up the lessons. I told my brother Bobi that this group would be troublesome and trigger infights in his party. My anticipations have lived to pass,” Mao added.

At the same function, Mao officially unveiled radio journalist and actor, Charles James Ssenkubuge as the DP Lord Mayor candidate. Mr. Ssenkubuge acknowledged his interest in holding the flag and stated, “I made my short analysis about our politics. I assessed my strengths and weaknesses, and realised I’m more grounded and the best for the position, ” Siasa says. “We have a shortage of presentable politicians in Buganda. We must wake up to that call and come out to participate in the politics of this country,” he added.