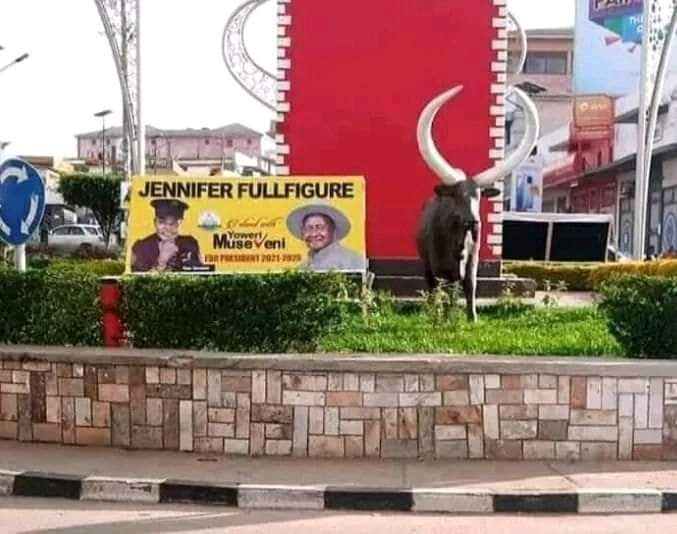 Renowned regime reprobate and self pronounced presidential advisor, Jennifer Nakangubi alias Full Figure has faulted the National Unity Platform party for coordinating an assault meted out on her last evening in Mbarara city.

Ms. Nakangubi had planned to have a heroic welcome before supporters of the ruling NRM party foiled the entire arrangement on grounds that they could not allow a P2 drop out to discuss to them matters of governance. A furious Full Figure says she has learnt that this raid was masterminded by supporters of presidential candidate, Robert Kyagulanyi Ssentamu alias Bobi Wine who heads Uganda’s leading opposition wave dubbed National Unity Platform. “My informants have told me that everything I faced on Monday night was planned by NUP western coordinators,” Full Figure says. “They are jealous of my success as a presidential advisor. I am a general and all that happened to me is nothing,” she adds.

She however warns of launching a retaliation on case Bobi Wine does not tame his supporters whom she accuses of being brutal and hostile. “I ask Bobi to tame his supporters. I am a general and I can do anything if provoked,” Full Figure warns. “I will return to Mbarara and if anything happens to me again, I will fire back at Bobi,” she warns.

Mbarara NRM supporters clearly told Full Figure to vacate their city if she could not promote Kyagulanyi Ssentamu for presidency. Full Figure and ber agents bad tonight it was a joke till the youths mobilized and defaced her poster that she had imposed on the iconic cow sculpture roundabout in the heart of Mbarara town. The enraged Mbarara residents called on the city mayor, Robert Kakyebezi to either remove Full Figure’s posters or they’ll help her do it themselves. Full Figure was later on Monday evening scooped from Agip Motel where she was smoking shisha and marijuana in her free time. Reports say, Bajjo was also present but fled when the tension and fury of residents escalated.