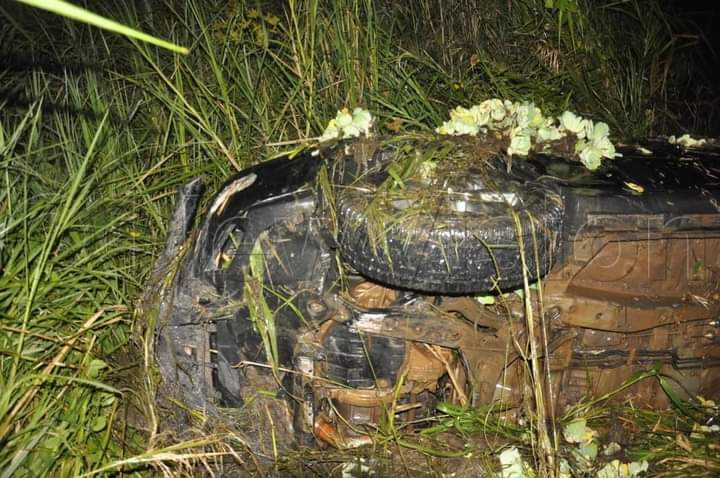 Former People Power coordinator, Nabaasa Rogers is dead following a deadly car crash in Lwera along Masaka road. Rogers was travelling in the night at the time of the tragic accident. The locals around the scene attribute the escalating accidents to the UNRA which they say has deliberately turned this place into a hotspot.

SEE ALSO: Just in: Fatal accident kills one on the Northern bypass

According to reports by the Masaka traffic police, the deceased hit a hump and the vehicle veered off the road to a nearby swamp. The deceased was travelling with a woman in his vehicle who has also been identified as Kyasimiire Jackline aged 22.

Nabaasa Rogers is a former coordinator of the People Power movement. He was deployed by the Kamwokya secretariat to help mobilize the Bunyoro region before his eventual defection to the ruling NRM party last year. The deceased was welcomed by the NRM chairman himself, Gen. Yoweri Tibahaburwa Museveni in an event where he denounced any further engagements with presidential candidate, Robert Kyagulanyi Ssentamu alias Bobi Wine. The deceased is also alleged to have played a pivotal role in luring renowned People Power blogger into having an engagement with Mr. Museveni at Kisozi farm. Even in the photos which leaked out this year, the deceased Nabaasa is seen featuring. The diaspora community are apparently castigating the deceased Nabaasa for allegedly defrauding them if their money and resources when he claimed he needed assistance to coordinate for the People Power movement.