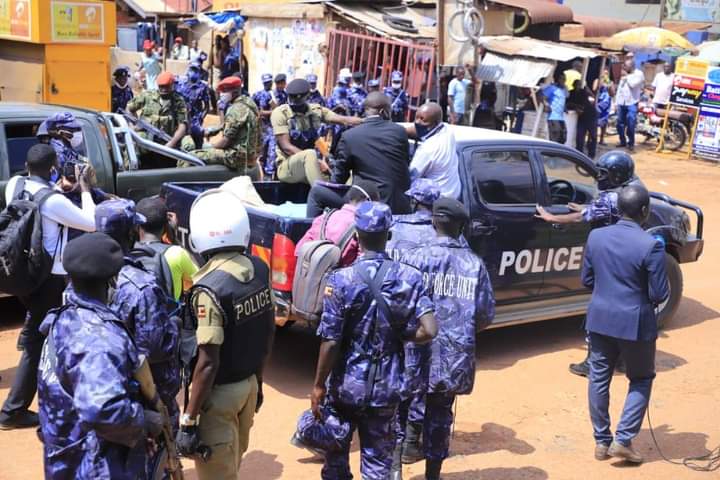 In Nebbi district, supporting the National Unity Platform party president, Robert Kyagulanyi Ssentamu alias Bobi Wine is criminal and outlawed by the local authorities ahead of the Friday court ruling. The RDC, Mr. Omara Christopher, a sworn regime cadre criminalised the activities of NUP within the district and has made it routine to arrest and raid coordination offices.

We are reliably informed that he usually invades NUP coordinators residences to frustrate them. “He plans to arrest me before the nomination of our candidate,” reveals, Mr. Kizito, a coordinator of the NUP. “The home of our candidate, Wilfred has already been besieged by the forces,” he adds.

Our reporter lands in Nebbi town at exactly 17:00hrs. We find a calm centre with normal trade taking place. Politically, this has been a hub of the opposition FDC party but with the emergence of the People Power movement, the goal posts have shifted. In the town centre, only the ruling NRM party posters are visible. It is not because the people love the party but rather because the RDC, Christopher imposes a heavy rule in the district. We are told that he deploys soldiers to monitor and arrest any NUP coordinator or candidate that pins posters that are not for the NRM candidates. “Pinning NRM posters in Nebbi is okay. The RDC can even reward you for that. But anything red is criminal,” Kizito says. “In fact even today, one of our comrades has been arrested by the RDC and hurriedly arraigned before court where the magistrate acquitted him without any charge,” he narrates what ensued today.

We visit the residence of the NUP Nebbi candidate, Wilfred Komaketch and indeed it’s soldiers who usher us to his premises. One of his relatives tells us the soldiers are not on invite but rather a mission to grab Mr. Komaketch before the final nominations day slated for tomorrow. “We did not invite any of the soldiers because we don’t need any security. We are not criminals,” the relative tells our reporter. “The RDC deployed them to arrest the NUP candidate before the final nomination day,” she adds as tears roll down her eyes. We hang in the area to see if the NUP candidate will successfully be nominated tomorrow. We are tipped that the RDC has already instructed the Nebbi district headquarters not to nominate any NUP candidate. He argues that the party has been outlawed by the government.