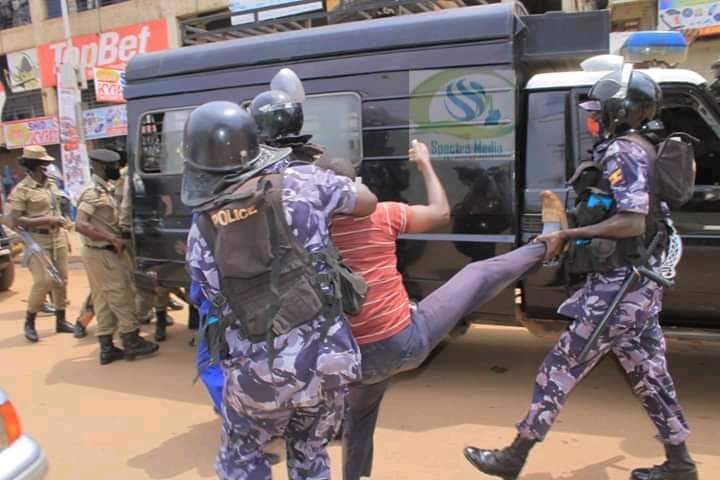 Police and the military spent the greatest deal of Thursday facing off with vendors in downtown Kisekka market who protested the defacing of posters of the National Unity Platform party president, Robert Kyagulanyi Ssentamu alias Bobi Wine.

The scuffle which lasted for about an hour saw police fire teargas and live bullets to disperse the angry riotous Kyagulanyi supporters. At about 9am, police arrived at the market and started confiscating gigantic posters of presidential candidate, Kyagulanyi. The traders who attempted to inquire why the posters were being confiscated were harshly brutalised by baton wielding military personnel. This prompted other vendors to turn riotous and protests broke out at the market centre. “The military police has been warning that they will take Bobi Wine’s posters for having a beret,” reveals one spare parts dealer in Kisekka. “They had asked the market chairman to identify supporters of Bobi Wine. We don’t know why the military wants to know who supports Bobi,” he adds.

By closure of the protest, several vendors were arrested by police. They are currently under detention at CPS and yet to be charged for inciting violence according to multiple reports we are getting.

The confiscation of Bobi Wine posters has been featuring in the downtown. Earlier last month, police faced off with Kikuubo traders who protested the vandalism of a gigantic poster belonging to NUP president, Robert Kyagulanyi Ssentamu. The same is what triggered the protests though police maintains that they did not know what was taking place. “We only came in to restore normalcy. We don’t know why the vendors lost their Cool and acted unruly,” reacted the Kampala Metropolitan police spokesperson, Patrick Onyango when reached on phone.