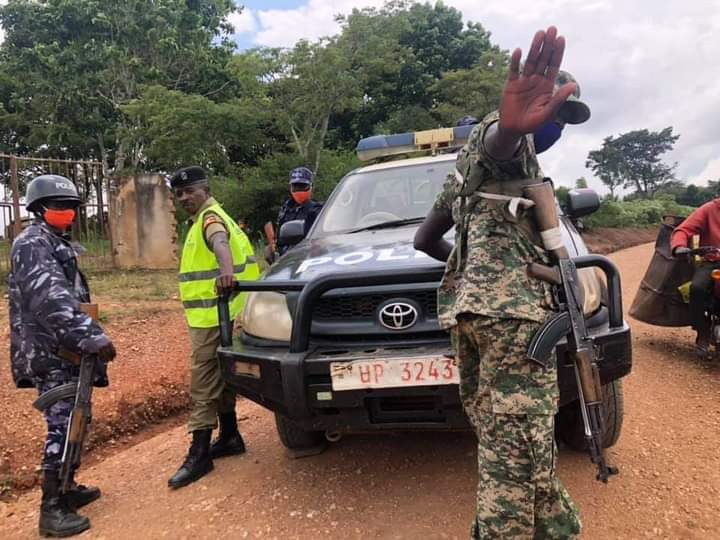 Mityana was today a battlefield for the idle men in uniform after they stormed a meeting of Buganda kingdom leaders of the Buffalo clan (mbogo clan). The army after being tipped off that presidential hopeful, Kyagulanyi Ssentamu Robert was to preside over the function as the chief guest. Police and UPDF deployed heavily just outside the venue to frustrate Kyagulanyi and bar him from advancing to the function. At exactly noon, police stayed firing teargas at the clan elders and the meeting ended in a pandemonium. Several people including under aged children have been injured according to the reports we are receiving. A witness who spoke to us under the condition of anonymity says police and UPDF even kicked a heavily pregnant woman who was bypassing the scene. “They kicked an expectant woman who was passing by to attend to her duties,” says the source. “One of the men in uniform kicked her on the back before she fell down and blacked out,” she adds.

SEE ALSO: COMMENTARY: Bobi Wine will give Uganda her deserved independence and glory

Kyagulanyi was blocked alongside former Makerere University Vice Chancellor, Prof. Ddumba Ssentamu who is also a member of the buffalo clan. The duo were hijacked and asked to leave without fail. The violence was indiscriminate as even Catholic clerics who were present at the function weren’t spared by the adventurous plumes of teargas. Kyagulanyi narrates what ensued in a post he published a few minutes back

Our MBOGO clan Headquarter in Mugulu, Singo is under Police and military siege . Today, as the Mbogo clan members were holding thanks giving prayers to commemorate seven years of Jajja Kayiira Gajuule’s successful chairmanship of the clan heads council of Buganda, the Uganda police and the military raided the place, fired live bullets and teargas into a group of less than 40 dignitaries who were attending mass led by Bishop Kaggwa and prayers were disrupted.
Our Clan head and most elderly people who were in attendance were severely affected.
I and other clan members including Prof. Dumba Ssentamu have been blocked from accessing the venue. Many young people were arrested and am informed that they’re being held at Mityana Police.
We strongly condemn this blantant disrespect of our culture and cultual institutions by the security forces.