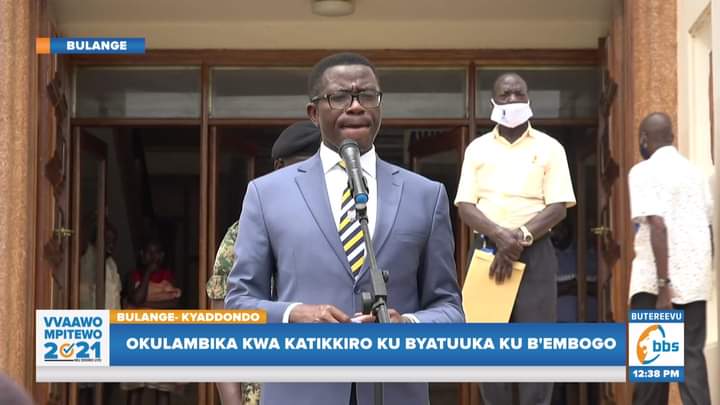 We write this Petition your Majesty to protest against the intentional, illegal and high handed attack on our culture as the people of Buganda.

Your Majesty, as you are aware, there has been a deliberate attack on our culture and cultural institutions by the government of Uganda, presided over by Gen. Yoweri Kaguta Museveni.

Numerous times, elements within security forces have disrespected our leaders, attacked our culture and raided our holy places with reckless abandon.

Article 37 of the Constitution of the Republic of Uganda recognises the right of every Ugandan to belong to, enjoy, practise, profess, maintain and promote any culture or cultural institution. This right has been trampled upon by the government. Every day that passes, it only gets worse.

Your Majesty, on the 17th day of October 2020, as norm and custom, the head of the Mbogo Clan who has been equally serving as the head of the Bataka Council of the Buganda Kingdom for the past over 7 years, invited selected guests who were 40 in number so as to abide by the COVID 19 Standard Operation Procedures for a thanksgiving mass to appreciate God for the gift of life and giving him the ability to peacefully serve the people of Uganda specially the Buganda Kingdom.

Among the invited guest was his grace Bishop Kaggwa, some Bataka of Buganda, area Member of Parliament and other prominent leaders.
No sooner had the function started, the DPC a one Mwiine Mukono Alex stormed the venue which is the Mbogo clan ancestral home in Mugulu, Mityana District and fired teargas and live bullets at the gathering. We watched with shock as our elders – mothers and fathers, were crying under the weight of teargas. The high handed officials did not show any reverence for our cultural leaders as well as our religious leaders. The DPC arrogantly ordered them to close the meeting.

This openly showed that the government no longer respects any traditional institution. This is collaborated by the previous attack by the same government on the Rwenzururu Kingdom where a number of Ugandans lost their lives including women and children.

We demand;
1. That the government of Uganda arrests and prosecutes a one Kagarura Bob, the RPC and Mwine Mukono Alex, the DPC the in their personal capacities due to the following reasons,

It has come to our concern as “Baganda” that these two security operatives have personal vendettas against Buganda as an institution and the people of Buganda.

As a matter of fact Mr. Mwine and Kagarura commanded the security forces which arrested and tortured Hon. Zaake Francis Butebi beating while castigating him for being a Muganda.
2. That the IGP Uganda Police Force and the CDF Uganda People’s Defence Force officially apologize to the people of Uganda at large, the Buganda kingdom, the Catholic Church and all affected religious institutions.
3. That the Katikiiro of Buganda comes out openly and condemn all the atrocities committed to all the people whom he presides over regardless of their tribes but due to the fact that they are residents on Buganda soil.
4. That the function which was sabotaged by the central government is re organised and left peacefully to take place.
5. That the Speaker of the Buganda Lukiiko urgently calls it to sit and decide on the next step to be taken as a kingdom.
6. That the Lukiiko of the Bataka is called and discuss on what next otherwise the same thing can happen to another Mutaka just as it happened to Omutaka Kayiira Gajuule.

We so pray.
Sincerely,

The People of Buganda

Cc. To the Lukiiko of Buganda Kingdom
Cc. To the Parliament of Uganda
Cc. The Inter-Religious Council