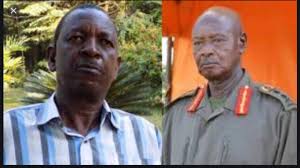 The knifed ISO boss, Col. Frank Kaka Bagyenda has reportedly rejected Museveni’s diplomatic offer after perceiving it to be a former means of getting rid of him. An infuriated Bagyenda has sworn not to board any flight to Luanda as he prepares to resume his fishing duties in the Kalangala islands.

According to credible sources, Col. Bagyenda has advised the president to relieve him of any duties and leave him to peacefully retire back to fishing in the Kalangala islands where he was recalled from in 2017 when he was announced the Director general of the ISO. “He is not interested in travelling to Luanda to pursue any diplomatic duties,” a source close to Kaka told this site. “He wants to go back to Kalangala and do some fishing. He was a passionate fisherman before they appointed him ISO head,” the source explains.

At the start of this month, trouble befell Col. Bagyenda when the Commander in Chief issued executive orders calling for his immediate sacking on allegations that he was doctoring high profile security reports. A stubborn Bagyenda declined to leave office till the SFC and CMI were dispatched to arrest him last weekend. On Monday in a twist of events, Kaka survived Indictment as Museveni resolved to put him out of the spotlight by appointing him an ambassador to a distant Angola in what appeared to be a move to settle down the rising dust.