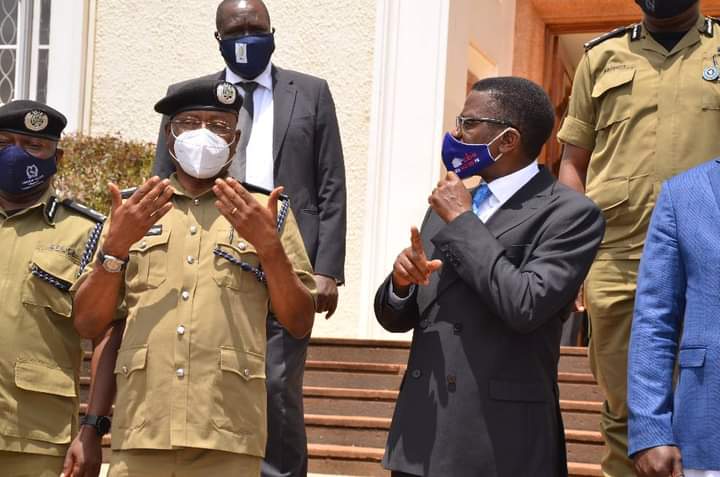 The Katikkiro of Buganda Charles Peter Mayiga on Wednesday asked the police administration to investigate and apprehend the DPC of Mityana, Alex Mwiine Mukono over last weekend’s crackdown on Mbogo clan elders.

The Katikkiro made this request while meeting an entourage from police which had been led by their chief political commissar AIGP Asan Kasingye. The Katikkiro acknowledged receiving the police’s formal apology but requested that action gets taken on those who commanded the Saturday raid. “When someone makes an apology and seeks remorse, it means they have admitted to their wrong actions,” Katikkiro said. “Looking at footage of the commander of that operation, one would see someone who acted unprofessionally. I think the police must take action on its man, Alex Mwiine so we avoid similar scenarios in future,” Katikkiro added.

He further urged the police to tame and train its members to respect people’s rights. “Policing does not mean violence. Some officers think that beating up people means upholding the laws. This mindset should be changed,” Katikkiro advised. “We are tired of teargas, unnecessary arrests and torturing of the people of Uganda,” he added.

By the time of filing this report, this site learnt that the Commander in Chief, Gen. Yoweri Kaguta Museveni issued executive orders asking for the arrest of the troublesome Mityana DPC Alex Mwiine. Credible sources indicate that Museveni does not want a replica of the 2009 Buganda crisis where over 27 people died and dozens remain incarcerated in Luzira following street tensions as people contested the central government idea of meddling in Mengo affairs.