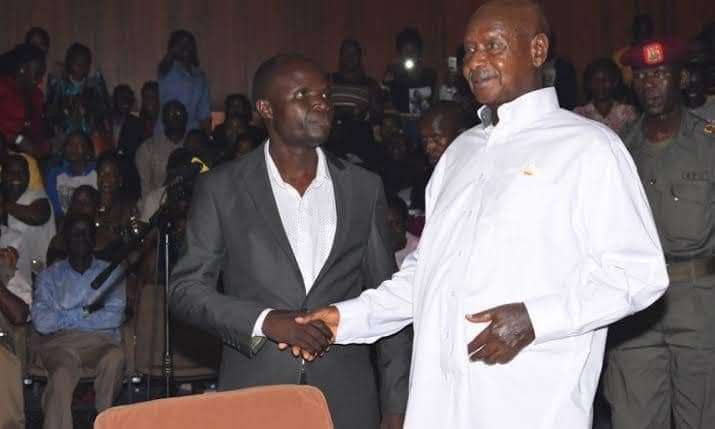 Renowned for his controversy amd unreliability, singer Ronald Mayinja has again overtly opened up on supporting the NRM party chairman, Gen. Yoweri Tibuhaburwa Museveni for the presidency in 2021.

Exclusive: Ronald Mayinja plots to meet Bobi Wine, Vows to campaign for him

Mayinja who has been on his second and final chance having defected to NRM for luxuries last year but would later on seek remorse in the NUP. The principal, Kyagulanyi Ssentamu Robert alias Bobi Wine accorded him a second chance and appealed to his supporters to exonerate the ‘Bunkeke’ and ‘Bizeemu’ hit maker. Barely months after showing his allegiance to the NUP party, Mayinja has today opened up on who he is going to support in 2021. In a statement which has attracted an outburst from Ugandans who are fed up with his defections, Mayinja braved the social media bullies and insults to openely pay allegiance to Tibuhaburwa. Mayinja writes;

“I’m for Museveni in 2021. He has done alot of good things for our nation. I will vote for him untill 2040. He’s got the vision for this country. He’s the only man who can lead Uganda to prosperity and transform the lives of the citizens, not these hooligans and ganja people who have no knowledge about leadership. NUP just makes noise and killing innocent people. They are actually very dangerous than Museveni. They don’t deserve any leadership position in Uganda. They are very confused and tough so murderous to manage the affairs of this country. They are very harsh and intolerant. Don’t vote for them bambi. We need our country under good people. Museveni is the amswer to Uganda’s problems.”

Sources close to the singer reveal that he has been choking on debts following the eventual halting of funds from the regime that had injected billions in his parallel ‘Peace for all, All for Peace’ platform which had been formed to tame People Power. Mayinja’s debts forced him to even auction off his house and as well fail to pursue his political dream of legislating for Gomba county.