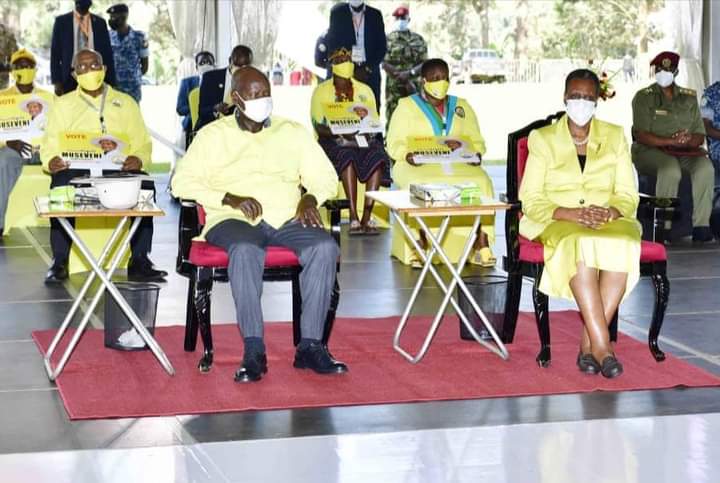 Justice Simon Byabakama has finally ended the lingering controversy of the academic credentials of Uganda’s longest serving despot Gen. Yoweri Tibuhaburwa Museveni after announcing him a duly nominated candidate for the 2021 presidential election.

The EC boss on Monday declared Tibuhaburwa fit to run for presidency despite an impending petition challenging his academic credentials. I, Justice Simon Byabakama, declare Yoweri Kaguta Tibuhaburwa, a duly nominated presidential candidate for the 2021 general election,” the EC boss said in a live TV broadcast.

It should be noted that a few months back, lawyer Muwadda Nkunyinji lodged in a petition challenging the EC to produce Museveni’s credentials. On the contrary, the EC suppressed all efforts to have Tibuhaburwa’s papers publicized as case was with opposition candidate Kyagulanyi Ssentamu Robert whose documents were exposed in just a blink.

The presidential elections act mandates that any aspirant who vies for the top seat must have all the necessary credentials the primary being that a candidate should bear full citizenship of Uganda and also hold a minimum of a UACE. Tibuhaburwa Museveni is doubted to have any of the two. In 1980 when he first surfaced on the ballot to tussle it out with Sam Kahamba Kuteesa, he was rejected on grounds Museveni was rejected by voters on grounds that he was a migrang from Rwanda. 35 years later, his ancestral name Tibuhaburwa went public after opposition investigators exposed him and alleged that he is not a native. Museveni shamelessly owned the name he had concealed for all the time he has been a candidate. The controvery on his academics too remains unresolved.