Bobi Wine rallies Ugandans to be focused as 2021 looms 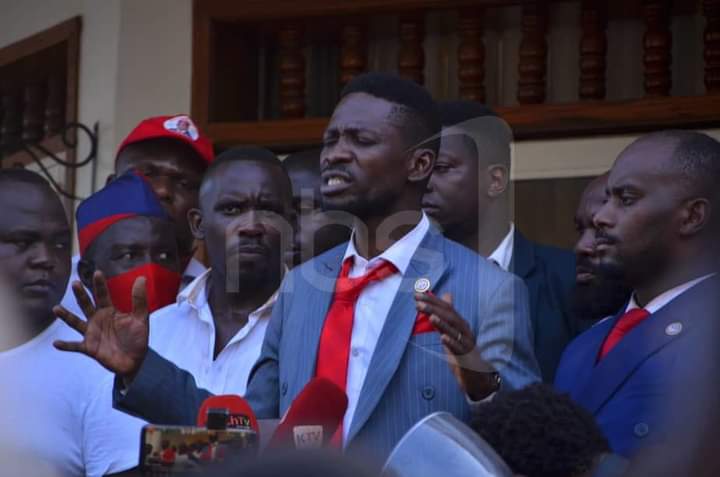 The National Unity Platform party president Kyagulanyi Ssentamu Robert aka Bobi Wine has called upon Ugandans to rise and embrace the mega task ahead as the 2021 general elections loom.

Kyagulanyi who appeared frail courtesy of the maltreatment accorded to him by mean looking military and police officers brandishing warfare weapons, bitterly sent a message to the men in uniform who have turned it a hobby to oppress ordinary civilians. Kyagulanyi who had planned to launch his manifesto at the NUP headquarters was intercepted and barred from proceeding to that venue.

Kyagulanyi had intended to advance to his party offices in Kamwokya to launch his campaign manifesto as he had announced in his roadmap on Monday but everything has been sabotaged by the police which anticipated violence and flouting of covid guidelines. Kyagulanyi had no choice but address the press from his Magere residence in Wakiso district. “Fellow Ugandans, I am finally on the ballot. Our prayer has been answered and this is a remarkable step for our struggle,” Kyagulanyi said. “Just like you confide in me as your liberator, I am also counting on you as the backbone of our struggle for a new Uganda,” he added. An embittered Kyagulanyi asked Ugandans to be optimistic as he gave references to neighbouring countries like Libya, Mali, Burkina Faso and Malawi which had also been under captivity by the militaristic governments.

Kyagulanyi was in company of the party spokesperson Joel Ssenyonyi, his personal guard Edward Ssebuufu alias Eddy Mutwe, the party SG David Lewis Rubongoya among others. Bobi and his entire entourage were all brutalised earlier by police as they tried to sneak their way to Kamwokya. At least two people were critically injured as the military was dispersing Bobi’s supporters. We have since learnt that one of the victims is called Shamim, a lady who is a Kyagulanyi diehard. The other victim is a man whose identity we are trying to establish.