Road to 2021: Museveni names self after SFC headquarters, recalls 2100 troops from Somalia 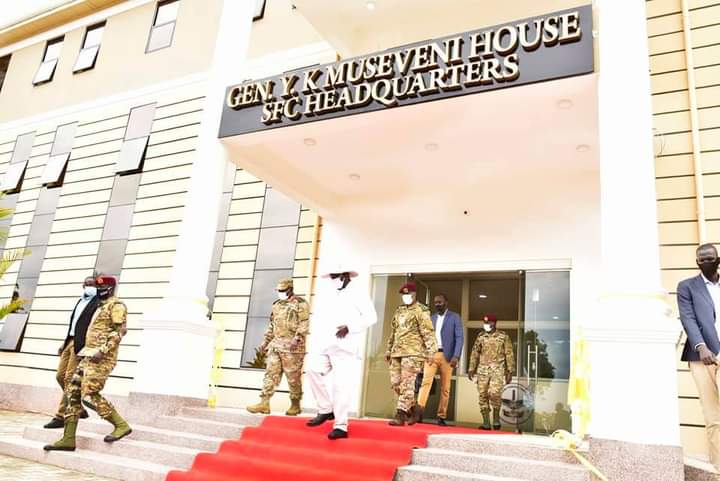 The Commander in Chief of all armed forces on Friday officiated and launched the headquarters of the elite Special Forces Command which cost taxpayers a whooping UGX 3.48 billion. The SFC headquarters were constructed in Entebbe just a few miles away from the State House.

At the event, president Museveni commended the SFC for standing with him in one of his most fearful moments in 2018 when he waa nearly battered in Arua as he returned from a byelection campaign. At the time of the byelection climax, Museveni’s motorcade was intercepted by a very large crowd as he left the final campaign rally for the NRM candidate Nusura Tiperu. Reports privy to this incident say Museveni feared for his life on the fateful day and when he survived this, he ordered for his immediate airlift out of Arua citing possible threats if he used the road means.

At the time of officiating the new SFC headquarters which he directed to he named after him, Gen. Yoweri Museveni urged the soldiers to be on standby in case of any violence by his political opponents. “I am still the serving president and I have heard these young people threatening and intimidating others. Let’s all be ready for them when time comes,” he said. The president also directed that the 2100 men contigent returns from Mogadishu with immediate effect as the 2021 elections draw close. The troops arrived on Friday and have been convened at Bombo where he is to engage them amd brief them about the elections.

It should be recalled that in the final moments of Zimbabwean ruler Robert Mugabe, he renamed the Harare airport after himself in the year 2017. The move is said to have triggered tensions and contributed to the political turmoil that later culminates into a military coup in a space of a week since he had renamed the airport after himself. It should not be a surprise if Mr. Museveni and his regime fall after officiating this SFC headquarters named after him.