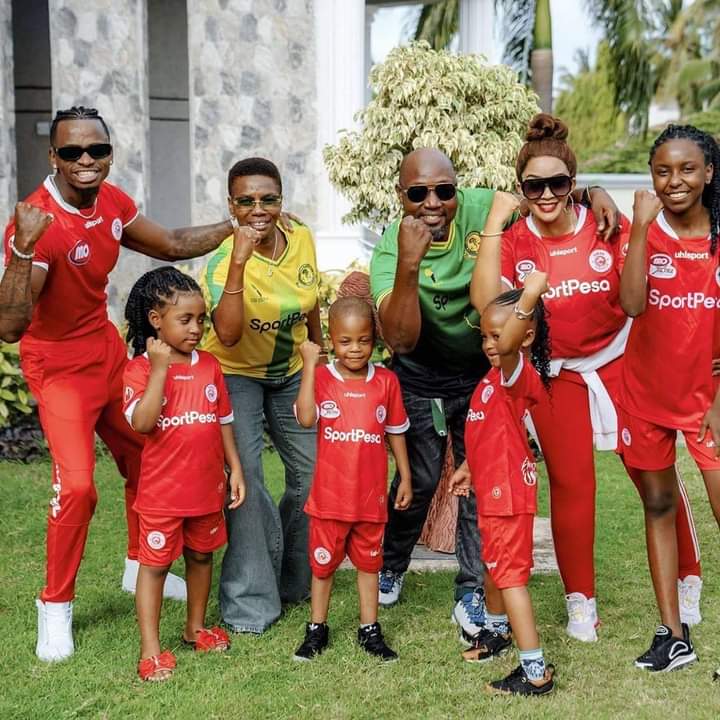 The renowned flamboyant socialite Zarina Ttale who is widely known by her social media moniker ‘Zari’ on Sunday had a family day out with her on and off enstranged lover, Diamond Platnumz and their two children.

The seasoned couple spent their Sunday on the pitch spectating to a fully fledged football game, courtesy of president John Pombe Magufuli’s relaxed covid approach. What caught the eye of the viewers however was the way the self anointed boss lady clenched her fist during the photo shoot after the football game.

Zari alongside her two children and her Tanzanian Afrobeat lover, Diamond appeared all smiles clenching their fists in a gesture that widely gained internet sensation and left majority of Bobi Wine supporters elated and impressed. Some even mistook the clenched fist gesture for an endorsement for presidential contender, Kyagulanyi Ssentamu Robert alias Bobi Wine who was earlier dissed by the same Zari as she punched holes in his credentials and leadership capabilities.

With Kyagulanyi fully nominated and writing history as Uganda’s first musician to ever feature on the presidential ballot, Zari had to swallow her pride and as well settle the dust to reconcile her thoughts and concede to reality that Bobi Wine is the long awaited liberator the nation has longed for.

Some NUP supporters have dominated Zari’s Facebook timeline in the comments section where they are commending their ‘inlaw’ Diamond for allegedly influencing the political mindset of the boss lady. One of the NUP supporters wrote, “finally, Zari has toned down and dismissed her petty talks against Bobi Wine. The clenched fist geature is a symbol of concession.” Another comment reads, “Glad to have Zari back to her senses. Bobi Wine is the awaited leader. He has all it takes to be president.”