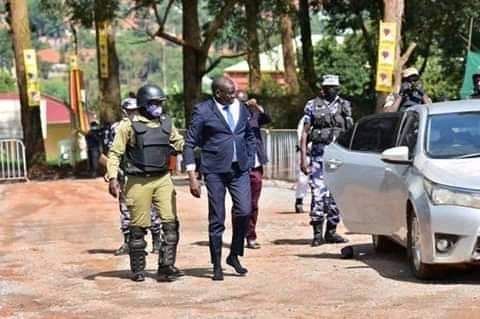 On November, 3 as opposition candidates of both the FDC and NUP prepared to get nominated, Uganda’s politics witnessed one of the most degrading unprecedented scenarios. In Najjanankumbi, the FDC party flag bearer Patrick Amuriat Oboi was hijacked by the Ndeeba Church lead destroyer DPC David Epedu who individually maltreated him and eventually confiscated his shoes. On the other hand, Museveni’s leading challenger, Kyagulanyi Ssentamu Robert aka Bobi Wine of the National Unity Platform party was intercepted just upon completion of his nomination. Surprisingly, his own guards participated in his torture and eventually overwhelmed his private security and dragged him to the arresting police vehicle.

Whereas the public hurriedly ridiculed the police for mistreating a presidential candidate, the EC chairperson Justice Simon Byabakama found no offence in nominating a shoeless man. A humble Amuriat turned up bare footed to fetch his nominations and this in a blink placed him in Uganda’s history as the first presidential aspirant to be nominated without shoes.

We however wonder why of all things police was interested in the shoes of a candidate. Our sources have since learnt that the troublesome Katwe DPC David Epedu is in fact a villagemate to Amuriat in Soroti. It cannot be ruled out that the duo could have planned the stunt to place POA and the struggling FDC party back to the limelight as their times have been overshadowed by the new NUP wave which has taken grip of Kampala ahead of the elections.

Our interest should be drawn to the fact that the FDC party strategists have since embarked on marketing their candidate as ‘poor barefooted villager’ which largely communicates that perhaps DPC Epedu did not mistakenly confiscate the shoes but rather took them with the consent of Amuriat. The FDC is trying to campaign on a pre planned script and their campaigner is turning out to be the police itself.