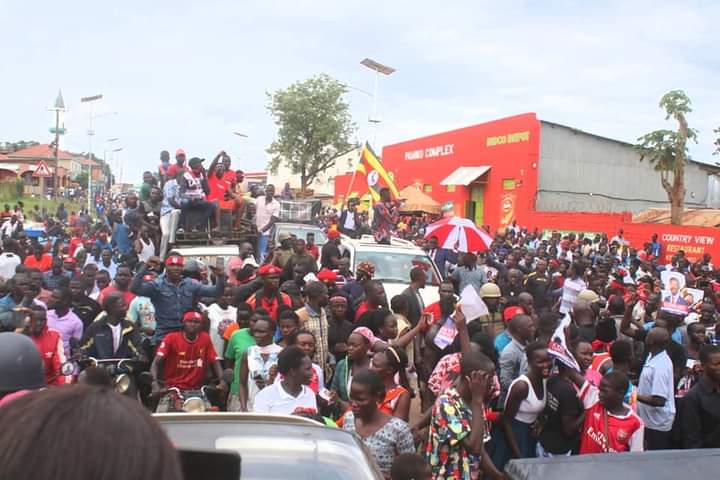 Supporters of the National Unity Platform party president Kyagulanyi Ssentamu Robert aka Bobi Wine have overwhelmed the partisan RDC of Kitgum district Komaketch William who had tried to block them from holding a rally.

The NUP leader has in a brief Facebook post given a recap of what transpired from the night when he and his team arrived in Kitgum district. Kyagulanyi says the RDC first mounted road blocks to all roads leading to the district in a bid to keep them away. After moments of negotiations between the Electoral Commission and the RDC William Komaketch, Bobi Wine was granted entry but escorted to a hotel room that had been purposely booked for him. Ironically, the hotel facility is owned by an NRM top cadre something that triggered suspence from the NUP team. Here is Bobi’s statement of his Kitgum experience;

So we got to Kitgum at 3:00am this morning and found a roadblock at the entrance to the district. They said they had orders for us not to step in the district at all. Earlier, they had lied that our program was clashing with that of another candidate, until late in the night when we engaged the Electoral Commission.

So on arrival, they took us to a hotel owned by an NRM chairperson and said they had booked that place for us. They insisted we must address our people from a place far away from town and attempted to block us from proceeding to Kitgum. But the PEOPLE OF KITGUM resisted this illegal conduct and swarmed us. Consequently, we have not held our campaign meeting as planned, but the people of Kitgum spoke loud and clear!

Next stop: PADER AND THEN GULU

This is a REVOLUTION