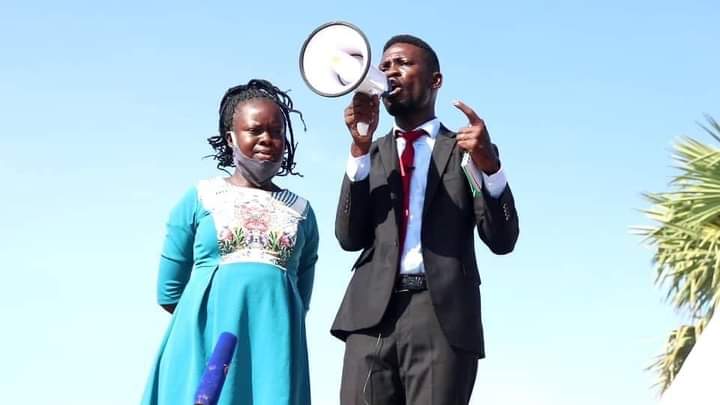 The young eloquent lady who on Tuesday appeared on the same pulpit with the National Unity Platform party presidential candidate Kyagulanyi Ssentamu Robert aka Bobi Wine us un trouble after her bosses want her indicted for allegedly violating the human resource manual which guides her nursing profession.

SEE ALSO: PICTORIAL: Bobi Wine lights up Pakwach on day one of his campaigns

According to local press reports, the woman has this Wednesday afternoon slapped with a summon by the District Authorities as they strain that she involved in partisan Politics by translating Kyagulanyi’s speech to the local language.

Multiple sources say that the woman is an enrolled Nurse at Pakwach Health Centre IV. Among some of the charges pressed on her includes the neglect of duty as she allegedly abandoned her job and attended a political rally more so for an opposition leader who is putting the government at stake. Reliable sources say that the RDC has picked interest in her case and wants her punished for translating Bobi Wine’s speech as he argues that it was marred with ridicule and contempt against the regime.

Our efforta to reach the troubled nurse turned fruitless as none of her contacts were available at the time we called.

Political pundits and economists say that Bobi’s magical fist five manifesto will win him converts within the civil service who feel they are underpaid for the work they do for the government. Nurses, doctors and members of armed forces earn very meagre salaries from the NRM regime which is why they are eagerly considering rallying behind Kyagulanyi Ssentamu who seems to respect and understand their hustles.