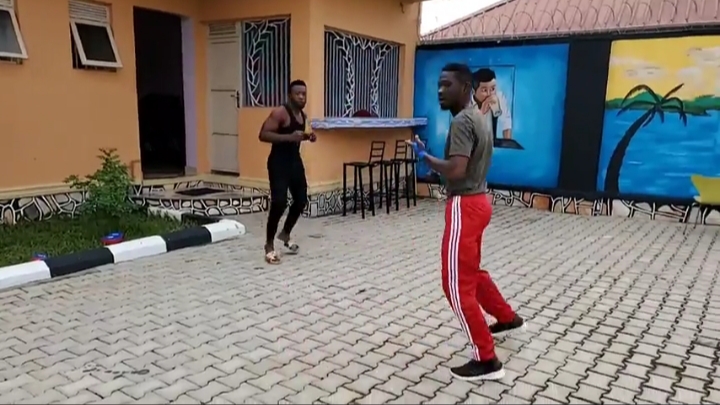 Presidential candidate Kyagulanyi Ssentamu Robert alias Bobi Wine has this Tuesday morning excited his supporters after releasing a video of himself working out at his hotel room.

The short clip showd him working out on his fitness after a chaotic week of inhaling plumes of teargas smoke. Kyagulanyi earlier on Sunday survived a direct life threatening raid on him after errant Mbale police commander Abraham Ahimbisibwe pelted a teargas canister inside his vehicle. This was not the first time this same officer has made a similar attack on Bobi Wine. About three months back when the NUP leader made his appearance to a Mbale radio talk show, ASP Ahimbisibwe was seen on video breaking into Kyagulanyi’s vehicle and pepper sprayed his eyes.

Kyagulanyi in his brief post explains the motive of his working out. He says this keeps his lungs active in excreting the teargas smoke which has become his routine inhalation.

His supporters have cheered him on for taking his health as a priority. Kyagulanyi who is just 38 years old has given the incumbent sleepless nights. A few days back in Nebbi, president Museveni also released his short clip of himself making some press ups. His PR team headed by senior journalist Don Wanyama Innocent intends to package him as a physically fit 76 year old.