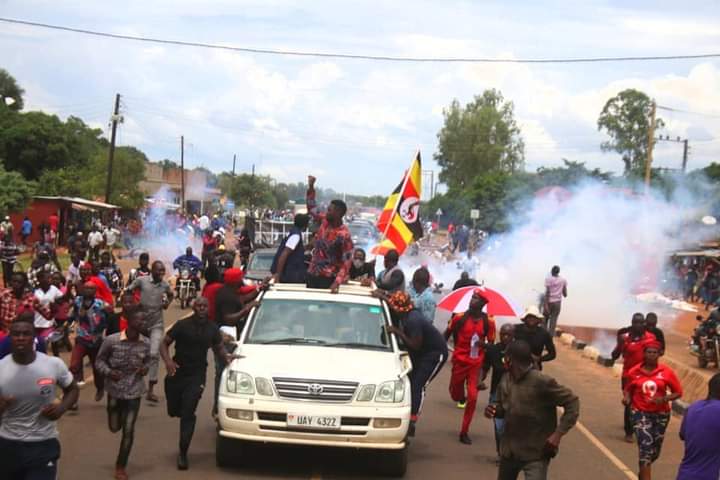 The National Unity Platform party secretary general David Lewis Rubongoya gives his account of events the party faced while in Kitgum last week. Lewis says it is astonishing that the RDC who attempted to distort NUP rallies over covid is the very one who today mobilized for the ruling NRM party. Rubongoya pens down a detailed juxtaposition of how the Kitgum RDC delt with the rivalling political sides as highlighted in the note on his Facebook handle below;

On Wednesday 11th November, we arrived in Kitgum at about 4:00am in the morning. We had driven the whole night for about 6 hours from Arua and everyone was tired. We badly needed to catch that sleep for some two hours or so before we would embark on the day’s activities.

At the entrance into the district, we found a roadblock manned by the military and police. Heavily armed! “We have instructions not to allow Kyagulanyi into Kitgum”, their leader announced! We asked who had given the instructions and were told it was the RDC. They told us that a hotel had already been booked for us some kilometres away from the town. We told them that we had in fact booked our own hotel in Kitgum, but they would have none of that. We made frantic calls both to the RDC and the DPC but I guess they were fast asleep! None picked up the calls. Seeing that it was so late and potentially dangerous, coupled with the fact that everyone was very tired, we decided to go and sleep at that hotel. On arrival at the hotel, we were shocked to be told that it belongs to the NRM chairperson in the area! That meant that most comrades were not comfortable eating anything there! Some were even scared of sleeping on the beds there. Just in case!

Any way, early morning, the DPC arrived at the venue in the company of the DISO. We found that police and military officers had surrounded the entire place and were not allowing any vehicles to come in or to go out. We engaged the DPC and told him he had no mandate to stop a presidential candidate from campaigning in a district. He told us he was implementing the directives of the RDC. We got the phone number of the RDC. We called it several times but he was not picking because he was apparently chairing a very important security meeting on how to deal with Bobi Wine in Kitgum.

Eventually, the RDC picked his call. I asked him why he was acting illegally and cited the various provisions of the law to him. He didn’t want to hear any of that, and kept referring to Kitgum as “my district.” He told us unequivocally that we were not going to campaign in his district! I asked him why, and he told me he was implementing presidential directives on COVID19. He spoke of how much he cared for “his people” and how much he was willing to do everything to protect them against the coronavirus. Well, we eventually found our way to Kitgum town, and immediately hell broke loose- teargas, live bullets, batons, water cannons, etc. We barely spent 30 minutes in Kitgum, but thousands of young people had already gathered to show solidarity. They marched with us out of the district.

Anyway, today I saw pictures of NRM supporters in Kitgum town and became so angry. We are told that the same RDC who claimed to care for the people of Kitgum, was behind the mobilisation drive, ferrying people from villages and buying cheap alcohol for some youth to march on the streets and show that they still love NRM and its leader. As they did this, they were under full protection by the police and the military. All of a sudden, COVID19 ceased to be a factor- it was a thing of the past. Likewise, teargas retreated and bullets were conspicuously absent. They had their fill as they made fool of themselves.

I recalled how yesterday, the Electoral Commission invited us, ostensibly to lecture us about observing SOPs during the election period!

The tragedy of our country is the conspicuous silence of those who should speak out. It is depressing that you will find some educated people out there supporting this regime and finding reason to justify these egregious violations!