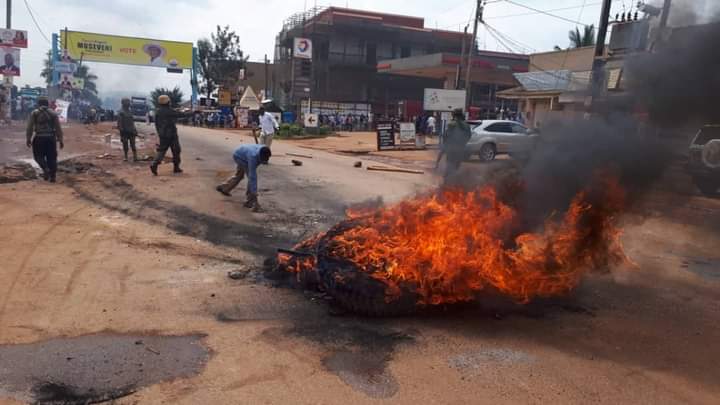 At least three people are feared dead following a wave of protests that have swept across all Ugandan major towns and cities as the public calls for the immediate release of the National Unity Platform party president Kyagulanyi Ssentamu Robert aka Bobi Wine who today morning was brutally arrested in Luuka district.

The Kyadondo East legislator who is now vying for presidency was arrested this morning in Luuka district by a one DPC Frank Mwesigwa. The manner in which the presidential contender was arrested triggered anger within the members of the public who have taken to the streets to demand for his release.

In Nyendo, Masaka people have blocked all major roads and lit bonfires. In Jinja where Kyagulanyi is detained in Nalufenya prison, people have also blocked all roads in the city. Scenes of running battles between Bobi Wine supporters and police are the order of the day.

In downtown Kampala, the protests started from Kisekka market and spread to the other city suburbs. At least three people have reportedly been killed in the running battles as police fired live bullets to disperse the protesters. Some clips are already making rounds on social media where a masked man is seen bleeding to death by the roadside after being shot. Another woman who vends food in Kampala was also shot dead by a military officer. By the time of filing this report, police and military had sieged off the city and asked all people to vacate to their homes. Below are some of the scenes all over Kampala and other major cities.