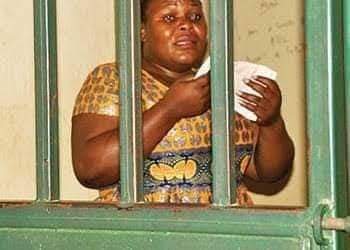 The self announced senior presidential advisor and faded musician, Catherine Kusasira Sseruga has finally spent her first night in custody at the special investigations unit in Kireka where she was detained on Tuesday after being implicated in fraudulent activities. According to credible reports, Kusasira spent her Tuesday night on the cold cement shedding tears and pleading to have a phone call engagement with the president to forge a way forward.

Kusasira and her co-accused Pr. Franklin Mondo were apprehended and charged before Lt. Col. Edith Nakalema’s anti-corruption unit which had learnt of their syndicate activities. Pastor Mondo was detained at Wandegeya police station where he has spent his first night too.

According to close sources, a shocked Catherine Kusasira pleaded with Lt. Edith Nakalema to grant her a second chance but all this fell on a deaf ear. “Kusasira asked Nakalema to allow her call the president and they negotiate,” a source close to the case told this site. “She cried tears and asked to be pardoned but Nakalema was furious,” the source adds.

It is said that Lt. Edith Nakalema pledged to recover the looted shs 4.4 billion that was defrauded from unsuspecting pastors. Kusasira and Pr. Mondo have allegedly been soliciting for money from city pastors pledging to fix immediate appointments with president Museveni. Investigations show that by the time Nakalema swung into action, Kusasira and Pr. Mondo had amassed a whooping sum of UGX 4.4 billion in cash and several other non cash items that are yet to be recovered.