EXCLUSIVE: Cop who survived hammer has a history of violence 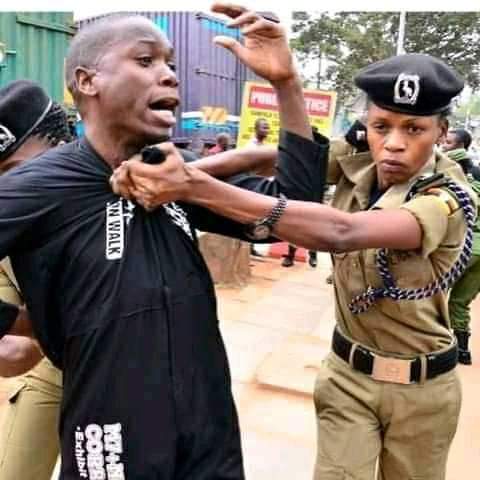 At the peak of last week’s Free Bobi Wine protests, an eye catching scene that gained public traction was one when a courageous man clad in red plummeted a hammer on the back of one of the police officers. The attacker turned out to be Ssebuliba Ssimbwa, a Boda Boda rider residing in Bweyogerere as per the police investigations.

The troubled cop has since been identifed as Kasule Consilata, a woman whom many other cops define as a tough officer in uniform. Ms. Kasule, the best cadet of the year 2016 class as per the police records was immediately deployed to the Kampala Metropolitan area where she hit the spotlight over her repressive way of handling opposition supporters and city activists.

In the tense days of the implementation of the presidential covid guidelines, Madam Kasule was familiar to the residents of Nsambya where she routinely spearheaded operations targeting ‘defiant’ Boda Boda riders that carried passengers. In the month of May, Kasule who was driving to work in a rush hour intentionally knocked and killed a Boda Boda cyclist and his passenger in the Nsambya, Kirombe area in the early morning hours and drove off without minding about her victims. Eye witnesses say later that evening glorified her actions by intimating that the victins ‘deserved it’ since they were operating on the road illegally.

Kasule intensified her operations by targeting unsuspecting motorists whom she would detain in her private vehicle or the cells at Kasawe police station and she would only grant them freedom after ensuring that they surrender at least UGX 50,000 each. One of her victims, a Boda rider who spoke to this reporter under anonymity reveals that he was held inside Ms. Kasule’s vehicle for two days till his relatives negotiated a shs 60,000 bounty for his release. It is therefore not surprising that at the time of the protest, Ms. Kasule was targeted by a Boda Boda cyclist whom perhaps she could have angered some time back and the protests brought in an opportunity for revenge.