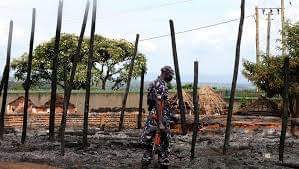 Four years ago on this day, the UPDF and police attacked the Rwenzururu royal palace in Kasese, resulting in the deaths of over 200 people mainly women and children. Four years down the road, the families of the slain remain silently awaiting answers and accountability. Some fear to take legal action in fear of being singled out by the regime.

The clashes started with the government instigated raid on the office of the Rwenzururu kingdom office of the prime Minister in Kasese town where about 8 people attached to the royal guards unit were killed. On the same day in the evening, the UPDF and police clashed with royalists killing at least 32. The people also avenged and killed about 14 police officers and an undisclosed number of UPDF soldiers.

The UPDF retreated and organized a raid on the next day where they killed dozens and apprehended over 180 and tied them by the back before parading them before the palace gate even when they were naked. An independent report by the Human rights watch revealed that at least 153 people, including minors and women were killed during the bombardments in the palace premises.

Four years later with the palace cordoned off as a crime scene, it remains in ruins. The dark clouds have since overshadowed the skies of the once jolly Kasese community. Tears of rage remain rolling on the faces of the families of the victims whenever this specific day dawns. The wounds of the raid still etch fresh on the minds of the people. Majority fear to pursue justice for their relatives in fear of being victimised. ”We can’t go to the courts because police will come after us,” reveals a one Kule, a resident of Nyakasanga. “When you speak out, you become the enemy of the state,” he adds.

As the elections draw closer, the NRM government offered an out of court settlement with the Rwenzururu kingdom in which they agreed to release 147 living suspects out of the 180 who were arrested. In the truce, government pledged to release the Omusinga, Charles Wesley Mumbere towards elections and reestablish his ruined palace in a bid to reinvigorate bilateral ties. Important to note is also the fact that the NUP leader, Kyagulanyi Ssentamu Robert aka Bobi Wine pledged to revive the fallen glory of the Rwenzururu kingdom as he vowed to release the Omusinga of Rwenzururu as soon as he steps into the top office. With no hopes of getting justice from the NRM government, the Rwenzururu remnants are highly expectant of reaping big from Kyagulanyi’s presidential victory which they say will rhyme with their lost glory.