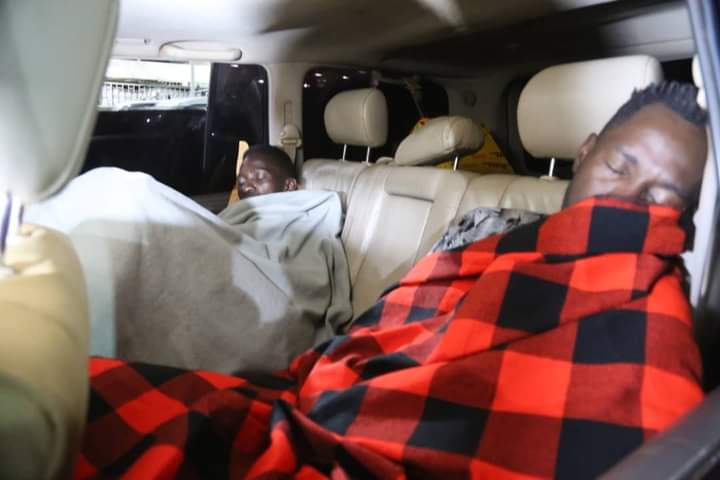 Presidential candidate Kyagulanyi Ssentamu Robert alias Bobi Wine and his entourage spent the entire Thursday night on the roadside after DPC of Nakasongola, Patience Namara instructed all hotel owners not to offer accommodation to the opposition leader. At about 20:00hrs when Bobi Wine and his team travelled to all town hotels, they were blocked by security forces. The DPC individually turned up and asked him to leave the town or sleep on the roadside and leave before 06:00hrs.

Kyagulanyi who was exhausted by the day’s hectic campaign schedule marred with bullets and teargas was forced to humbe himself to the cold and mosquito infested roadside.

“Morning shall come, we shall rise and get moving. DPC Patience Namara denied us access to any hotel within Nakasongola claiming we should have noticed her before. We ain’t about to give up,” wrote Nubian Li, moments after the DPC forced them on the roadside. The blockage was indiscriminate as it also affected the media crew that has been covering the NUP presidenti campaigns. Scenes of journalists sleeping on pavements dominated social media on Thursday in the dead of the night.

“We were traveling to Kyankwanzi via Hoima but the road was blocked by police which said it is under construction. We decided to instead spend the night in Migera but the police under DPC Patience Namara and the OC, Byaruhanga have ordered all hotels not to host us.

We’re now stuck and spending the night on the roadside. The DPC is telling us she will only allow us to stay in her district until 6:00 a.m in the morning.

You can imagine being treated like this in our own country,” Kyagulanyi wrote on Thursday night.