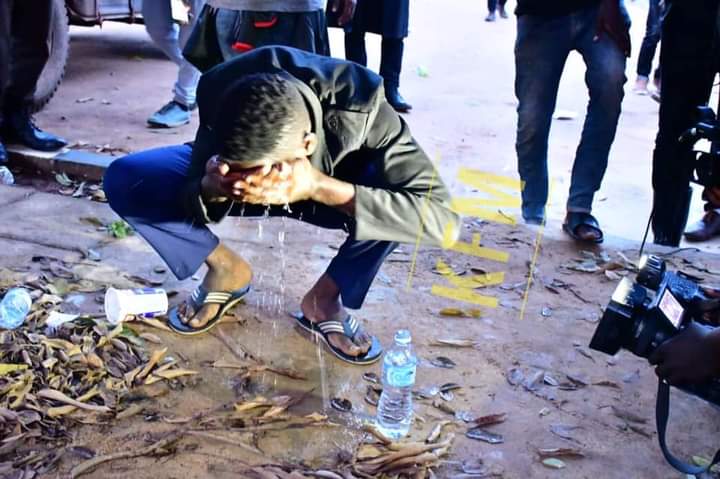 The NUP presidential candidate Kyagulanyi Ssentamu Robert spent the entire Thursday night on the roadside after police acting on the orders of a one Patience Namara and Byaruhanga blocked him from getting to the hotel he had booked for accomodation.

Police tactically restrained him from retreating to Hoima which could have been an alternative and Kyagulanyi ran out of options and pitched camp on the roadside.

“What you are doing is immoral. You turn me away from a hotel I’ve paid for. This is our country and we cannot be treated like slaves,” Bobi Wine pleaded. “Byaruhanga says I cannot sleep in the hotel. They’ve blocked all roads to Hoima and Masindi. We’ve decided to sleep here before we proceed to the next destination. They’ve ordered hotels to deny us accomodation whether we have money or not,” he added. 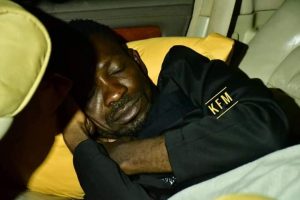 “The Byaruhangas, Musevenis and the Namaras slept in our homes. We gave them accomodation when they needed it,” Kyagulanyi remarked. One of his supporters engaged the insensitive police officers and reminded them of their duties. “You cannot treat a presidential candidate like this. You are ashaming the people of Ankole,” a female Bobi Wine supporter yelled at ASP Byaruhanga. “You cannot be a coward like this. I have never seen a coward like this one. Ho can you stop us from sleeping anywhere. We know the hotels belong to them but does this mean we are not Ugandans,” she added.

“Can you imagine what will happen when this young man you are mistreating takes over power?,” she asked the mean looking police officers.

His supporters nearly exchanged blows with the forces till he restrained from engaging them. Kyagulanyi urged them to be calm and emulate the non violence bid he is agitating for. “I want you to be disciplined. These people are provokong us to go their way. Leave them to expose their immorality. Don’t engage them, let them do as they please. I know what we are going through is annoying but let’s maintain civility. We are under watch and the world needs to learn from us,” he told his supporters who were charging at police. The team later retreated back to their vehicles where they spent the night. In the morning hours at 6am, DPC Namara returned with a fully fledged armed gendarme of troops and ordered Bobi Wine out of the boundaries of Nakasongola district.