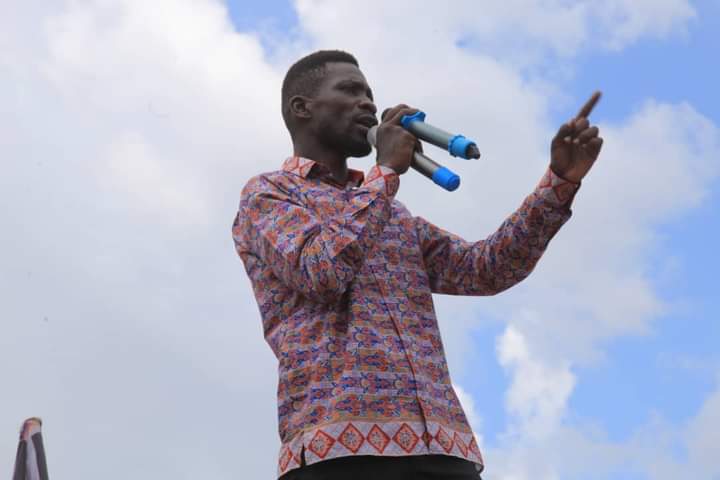 On Monday, the National Unity Platform party presidential candidate Kyagulanyi Ssentamu Robert took a swipe at the incumbent president Museveni whom he accuses of promoting violence and instilling fear in the population to bar it from contesting his 35 year reign. A visibly disgrunted Bobi Wine lambasted the regime for treating the lives of Ugandans like commodities that can easily be replaced with petty cash.

“You saw how the same old man [Museveni], who caused the death of more than 500,000 of our parents through his war in Luwero, conceded on TV last night that he is the one who ordered the killing of more than 50 Ugandans recently and he wasn’t remorseful at all. How can he be contemptuous of Ugandans to the extent of offering to pay off families which lost their children? Who of you here can accept even hs10bn for a leader to kill your child? This Museveni is just taking Ugandans for fools. In Luwero where you killed 500,000 people they haven’t yet been compensated yet you have had 35 years in power and yet you are here covering up your guilt by vaguely promising to pay our money to families whose children were killed on your orders “except that I have self-belief and I’m ready to lay down my life as a sacrifice for the rest of my fellow Ugandans to be free and I’m here to show you that each one of us can do something so that our children and grandchildren live in a better country.”

Kyagulanyi also used the occasion to demonize the Luwero DPC Tukunda who he claimed personally shot a child belonging to a young Luwero couple during the recent “free Kyagulanyi” riots.
Claiming that Gen Museveni was “restlessly” watching from wherever he is, Kyagulanyi offered to send a direct message to the man from Rwakitura. “Mzee Museveni you can talk on TV to show that you are a tough General but I’m here to assure you that we respect you for the old man you are but we don’t fear you. Not at all. You can kill some people and confine me in Nalufenya for as long as you like but a Kyagulanyi will keep emerging from every village of Uganda and we shall soon prove to be too many for you to kill as you wait to suffer the consequences. You can take us to Nalufenya, direct your men to teargas our people and use pepper spray to impair our sense of sight but we shall keep walking with swag until you surrender.”

Kyagulanyi also asserted that General Museveni has reason to be politically nervous in this era ruled by social media “because he knows what befell his comrades Gadaffi, Bashir and even Mugabe won’t spare him.”