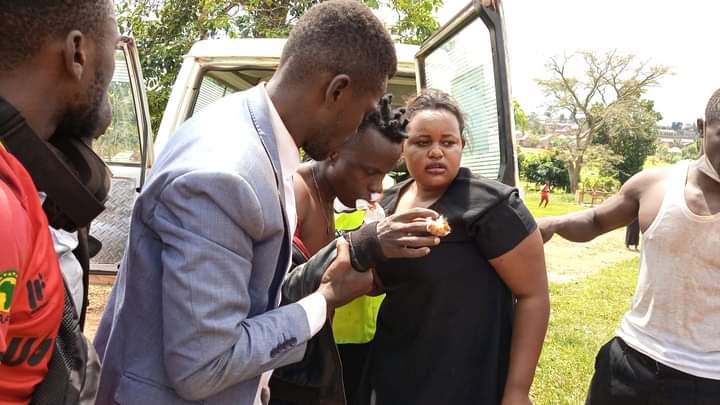 NUP leader and presidential candidate Kyagulanyi Ssentamu Robert has offered an emotive prayer to his comrade and music producer Daniel Oyerwot alias Dan Magic who was critically injured during the Tuesday pandemonium in Kayunga. In the prayer, Kyagulanyi empathetically imagines what his colleague is undergoing at the moment following the life threatening wounds he sustained when police attempted to assassinate him in Kayunga. It is said that Dan Magic offered himself as a shield to protect Bobi from being hit with a canister.

“Dear producer Dan Magic, I am not sure you had any sleep at night because of the terrible pain. Neither did I, because of thoughts.
I feel terrible that these criminals did that to you and I even feel even worse that you were only trying to save my life. If you were not around, it would be me on that hospital bed because it’s me who they were targeting all along. In very many studio intervals as you produced our music, we always discussed the price of freedom and as you can see, that is exactly what we are paying. My heart is with you this morning my little brother.
As for Afande Kato, I can only salute that noble police officer who was performing his duty of guarding my life only to be targeted by criminals wearing the same uniform as his. This further shows us that not all police men and women are evil, it’s a few criminal elements at the top operating on Museveni’s illegal orders. May the almighty heal your physical and psychological wounds and may all the pain be worth it at the end of the day.
My thoughts go to the families and friends of the very many Ugandans that are killed or harmed by the brutal police and military (many of them unknown), one day we shall be free in our country.
#WeAreRemovingADictator”