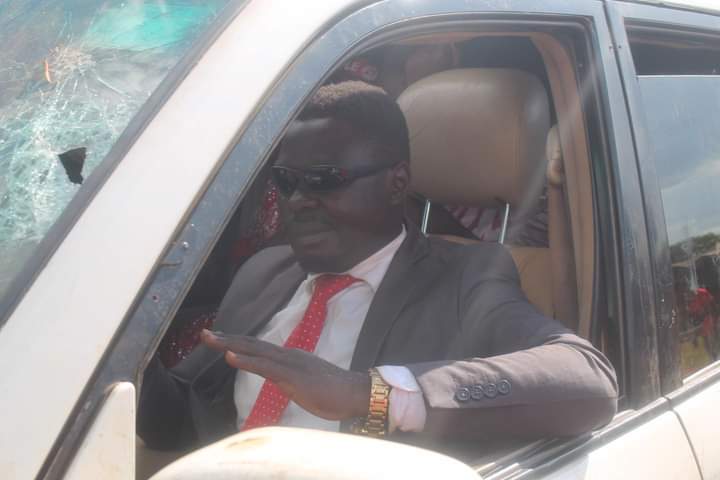 Mityana municipality legislator Zaake Francis Butebi who was on the co-driver’s seat at the time police attempted to kill the NUP leader Kyagulanyi Ssentamu Robert aka Bobi, says he is still breathing by God’s mercy.

SEE ALSO: ‘My boys will come for you again,’ Museveni warns MP Zaake

The 28 year old MP has on several occasions survived multiple state orchestrated attacks right from 2017 when he contested the age limit bill, in 2018 during the Arua byelection violence that left him injured for life. This very year, 2020 he was nearly killed by security forces under the command of DPC Alex Mwiine Mukono and RDC Bob Kagarura who accused him of flouting covid guidelines. The latest Monday incident has left Zaake glorifying God for once again shielding him from the shadow of death. The MP has this Thursday morning penned down a post appreciating God almighty for protecting him from all these trials and tribulations that have been cast on him by his perpetrators.

Monday the 1st of December, 2020 is yet another day that I will live to remember as being that which God confirmed to me once more that no one can end another’s life unless God deems it so.

I also noticed that there is yet an unfinished mission that he wants me to accomplish on earth.

On the fateful day I woke up just like all other days, prayed to God and dressed to join the campaign trail of Hon. Kyagulanyi Robert Sentamu little did we know that plans to end our lives had been already laid down by those in uniform contrary to their fundamental mandate of protecting life and property.

I should say that after that big bang on the wind screen of the car whose front passenger seat I occupied, I was never left the same. I started wondering whether or not I was alive, fortunately when I gained my senses life was still with me. It was not easy on my part especially after missing that bullet that targeted the occupant of the seat I sat in.

Great is thy faithfulness oh Lord! I will always praise you, for you have showed me mercy.

My prayer is that you heal those that got hurt including comrade Dan Magic and afande Kato, kindly comfort and provide for those whose loved ones have been murdered in the hands of the dictator.

That said, I should say thank you God, for you have showed us the signs of a crumbling dictator in Uganda. Uganda will soon be free

For God and My Country