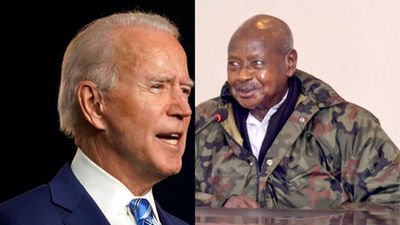 The Washington Post, one of the leading newspapers in the United States in the midst of the week called on the Democrat president elect Joe Biden to rein into the mayhem presided over by one of Africa’s living dictators, Gen. Yoweri Kaguta.

In an objective opinion pieced in the paper, the author, Jeffrey Smith calls on the Joe Biden administration to effective January, 2021 halt funding directed to the government of Uganda if the incumbent Yoweri Museveni prolongs his 35 year reign. The author opines that it is absolutely not right for the US to fund and facilitate a government that gravely abuses human rights. The Washington Post states that the $2 billion aid disbursed to Uganda should be frozen.

“First to launch a comprehensive review of all financial assistance to Uganda and any humanitarian assistance to be given to the third party such as civil society group to continue supporting Ugandans,” he writes. “Secondly, the US government should ban Museveni and his close allies responsible for human rights abuses from getting Visas and participating in US funded functions. Any assets belonging to Museveni and his family in the US should be frozen,” the piece adds.

The author also calls for cuts in diplomatic ties by recalling the US ambassador. “Thirdly, Joe Biden should temporarily recall the US ambassador from Uganda to Washington DC. in the US for further consultation as other policies are being finalised. This would be a major blow to Museveni since he has been termed as a long time dictator that has refused to leave office since the 1980’s,” the author urges.