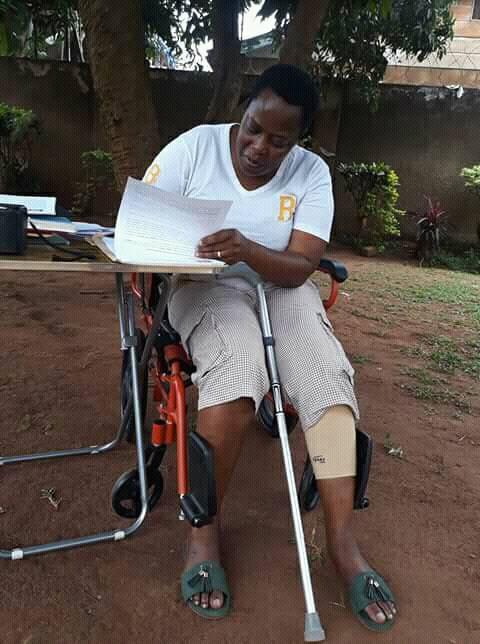 The RDC of Mukono, Fred Bamwiine who recently donned in a police uniform to block Bobi Wine rally is yet again in the spotlight following a raid he orchestrated on the incumbent MP, Betty Nambooze Bakireke.

According to a narrative by Nambooze, RDC Bamwiine organized a gang of hooligans to disrupt her campaign rally on Saturday. “Goons were ferried into the constituency and deployed at my remote village in Bukerere Ward with stones ,clubs and pangas….these deadly goons had been instructions to kill Nambooze,” MP Nambooze said after surviving the raid.

“We have survived death when we landed into an ambush by a killer squad master minded by RDC Bamwine and the good DP Kagimu and one Wamala Joseph,” adds MP Nambooze.

She farther stresses that the raid was made in vengeance of the successful NUP rally last week where Bobi Wine garnered a mammoth crowd when he had come to campaign.

“I’m told that a meeting sat after Bobi’s visit to see how to deal with Nambooze-NUP,/ Bobi Mukono supporters. Funds were recieved to finance this and one Kamulegeya of Kiwanga was appointed to lead this devilish mission,” she explains.

“The residents of the area innocently organised a big meeting with a group of dancers comprising of the children under our care.
Without noticing that I was surrounded I got up to address my people from the roof of my car. As soon as I shot up stones started landing with two of them hitting me on the left arm and the other on the Neck,” Nambooze narrates. “The next minutes the goons beat up my people, smashed car screen. My team which was caught unaware moved to protect me and fight back. Well we have sustained injuries lost property but we shall not back out.”

On record, the Mukono RDC has been threatening to crash the NUP party and its leader. While appearing on the NBS Barometer Extra show a few weeks ago, RDC Bamwiine strongly warned NUP and its leader to be careful as he amd his intelligence were planning to block their plans of ‘turning Uganda into Libya’.