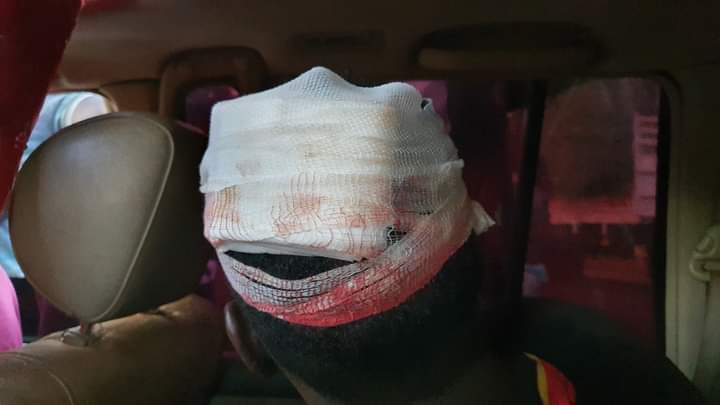 Singer Nubian Li, an aide to the NUP party presidential candidate Kyagulanyi Ssentamu Robert aka Bobi Wine has this Sunday evening survived a rubber bullet fired by police in Jinja.

Bobi Wine and his team were travelling to Kamuli district at the time the RPC Frank Mwesigwa ordered his men to use violence in a bid to block the NUP delegation. Mwesigwa was seen giving orders on phone from a vehicle in which he had locked himself to evade media attention. Police and military violently broke into the NUP delegation and started arresting each and every supporter of Bobi Wine. Most of the people were forced onto handcuffs and bundled onto police vehicles and taken into custody.

It is now clear that every time the police and military divert us from the main roads, their intention is direct us to their killing spot. On our way from Kamuli, just a few minutes from our next venue in Budondo, we found the road heavily blocked by police and the military.
We were diverted into a remote road which we found also blocked by police patrol cars. We were then immediately attacked by a group of counter terrorism police men comanded by Frank Mwesigwa, Odokchen, Hiriga and a one Mugarura. They did not give any reason for the attack but just started beating and hand cuffing my team while tear gassing the rest. In what I believe was yet another target on me, my brother Nubian li has been shot at with a tear gas canister and sustained a deep cut on the head. We were ultimately unable to make it to our next campaign meeting in Jinja. I know that the Electoral commission is watching all this criminality but conspicuously silent. #WeAreRemovingADictator