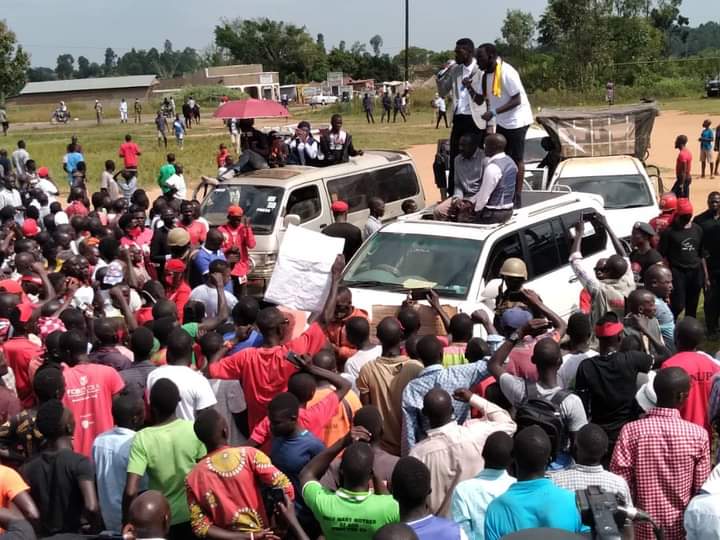 The National Unity Platform party presidential candidate Kyagulanyi Ssentamu Robert who is still canvassing for support in the West Nile region has this morning campaigned for the opposition Forum for Democratic Change party candidate, James Acidri.

Bobi Wine has for long rallied all opposition forces to unite for the liberation cause and to prove this point, his NUP party did not front a candidate in this particular constituency as a gesture that they are ready to work with change seeking forces.

“We did not come to wipe out the opposition, we came to remove the dictator Museveni,” Bobi told his supporters in Maracha. He further asked the people of West Nile to vote for independent Candidate Hon. Acidiri James and Forum for Democratic change parliamentary candidate Hon.Oguzu Lee Denis. “Even if Oguzu is running under FDC I want the people of West Nile to vote for him. When we started the National Unity Platform, Hon Oguzu told me that we must not look like we came to remove opposition but to remove a dictator and I agreed with him,” Bobi stated.

He further revealed that in his cabinet, all ministerial positions will be awarded on merit and not patronage. Bobi believes that all political parties have highly knowledgeable people who can serve this country in rightful positions which they have special knowledge about. “I want to tell you the people of West Nile and Uganda, don’t be surprised when my ministers come from different political Parties,” said Bobi
Bobi added that they can no longer be divided according to tribe, religion or political parties because they all have the same problems and there’s only one solution that is to remove the dictator.
Bobi also asked the young people riding bodas to be cautious of their lives because he wants them to be alive in the new Uganda.

Bobi and his team are currently headed to Koboko district where renowned NRM minister, Evelyn Anite declared a no go zone for NUP when she claimed to have ringfenced ‘her territory’ with a shield and she claimed to be the only gateway to West Nile.