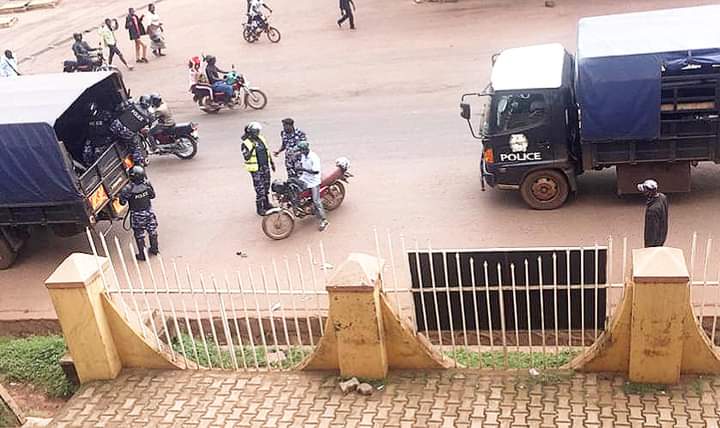 Lumumba Hussein Amin, a son to Uganda’s ex president (Idi Amin Ddada) narrates how he rescued dozens of citizens in his Kampala neighbourhood from being arrested and battered by police during the two day Free Bobi Wine protest last month. In this piece, he narrates how his intervention saw dozens of people freed from police trucks on which they had been bundled.

As I watched the riots unfold last month and roads blocked by burning tyres following the arrest of Bobi Wine, a convoy of riot police descended in my area and started shooting both live bullets and teargas to the population. They came in two truck loads of riot police, plus a police patrol Land cruiser pickup packed with more riot police, a water cannon/bulldozer truck, and a police M-RAP( known in Uganda as Mamba).

They then started shooting and arresting people indiscriminately in the area. The population had run for their lives anywhere they could, mainly in any nearby shops and businesses, to flee from the shooting. People in one nearby business were shot at, and the poke marks of live bullets aimed at citizens and windows shattered were only recently repaired from a nearby building. It is when arrests were being made that I decided to intervene on behalf of the population, asking the police commander why he was arresting an innocent person. Indeed I had been watching the riots for an hour before police arrived, and I had also seen the young men who had lit the fires disappear just before police arrived, and now police was just bungling anyone, innocent people, including our area boda-boda motorcycle rider who usually helps the neighbourhood with errands.
Other people caught in the action were actually fleeing the riots in town and returning to their homes on foot like a swarm of refugees fleeing a warzone. There was literally no public transport for anyone that day.
The police commander listened as I explained the innocence of the people he had arrested (that’s me in the first picture all in black talking to them) and then ordered the release of his victims.
I then gave police my contacts in case there was any further issue to answer for in relation to what happened here. Basically I was standing as surety for the people in my neighbourhood. You can see in the other picture the population of passersby walking in the background with their hands up in fear of being arrested or shot, this while police was putting out one of the huge fires just 50 meters away off camera.
It was simply impossible for me to just sit there and watch people whom we all knew were innocent, being taken to prison on trumped up charges of rioting. They were fortunate that this police commander took the time to assess what I told him about his operation, and the wider political implications of just rounding up innocent civilians and taking them to unknown locations where only God knows what would happen to them once inside the dark regime gallows.
I have only written this now because I have not received any further calls from police on this specific incident. A student from Uganda Christian University actually took these pictures thinking I was going to be arrested (In fact there is also cellphone video of this same encounter). I however imagine the fate of the thousands of people reportedly arrested under similar circumstances around the country that same day, and still languishing in unknown locations without trial, access to lawyers, or just being able to have a visit from their families simply because nobody knows where they actually are, what actually happened to them, or if they are even alive. Indeed the high number of innocent deaths almost 100 unconfirmed victims killed, including women and children, and even more injured on that day 19th November 2020 and still unaccounted for, will possibly remain an indelible stain of blood on the hands, face and uniform of the regime.