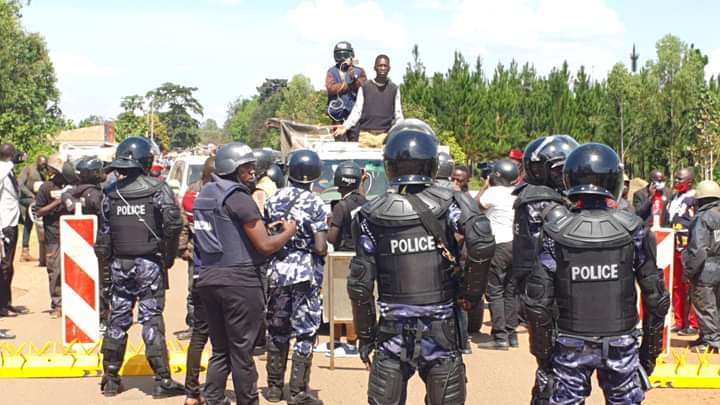 The National Unity Platform party presidential candidate Kyagulanyi Ssentamu Robert aka Bobi Wine is still under military captivity in Lira where he was barred from accessing Alebtong.

Bobi in multiple social media posts indicates that he has been held in that specific area for several hours. Kyagulanyi and his entourage were blocked from passing through Lira.

“These hooded, masked and heavily armed counter terrorism officers traveling in police vans UP 7690, UP 7714, UP 7713 are kidnapping some of our team members one by one and driving them off to unknown locations using an Police arrest van [Mobile prison], commonly known as mobile Nalufenya registration number UP 4923.” Bobi posted 3 hours ago. Before further indicating in a late night post that police was now pouncing on pressmen who were covering its heinous activities. Consequently, NTV journalist John Cliff Wamala, BBS Journalist Batte Ssesanga and Bukedde journalist David Tamale have been brutalised for covering the stand off.

“The Military and Police have yet again blocked us amidst a swamp on our way to Alebtong, no one is talking to us and we are blocked in front and from behind. As for now, we can not know what their plans are.
This is the third time the police is blocking us today. The whole world is watching all this injustice and someday, all those that are responsible for these criminal acts will be held accountable individually,” Bobi reveals in another post.