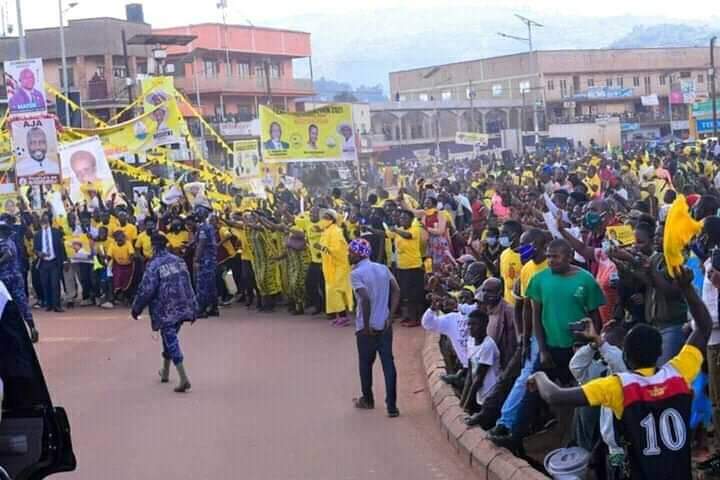 The NUP presidential candidate Kyagulanyi Ssentamu Robert today made a no show at the Electoral Commission as widely anticipated by the chairperson Justice Simon Byabakama. Bobi who was in the Karamoja subregion for his campaign trail instead delegated a team of NUP officials to represent him as he could not ably present himself. Bobi this evening charged at the EC in a letter he issued on his Facebook Platform.

SEE ALSO: Bobi Wine will not make it to the EC-Ssenyonyi

So the Electoral Commission claims that they are not aware that Mr. Museveni and his campaign agents actually hold processions! When the team went there today, they were requested to present evidence that NRM has been holding mass rallies and processions on public roads! Can you imagine the lack of shame? Good enough, the team was well equipped with some of these images captured in different areas where Museveni has been for his campaigns.

To show that they are serious people and an independent Commission, they must also invite Mr. Museveni to appear before them in person and explain how all these meetings have been taking place under the guard and watch of the police and the military.

While I would love to respect this man on account of his age, I think Museveni is the most dishonest political leader in history. I watched him speaking with a straight face to religious leaders about COVID SOPs and shuddered! The man uses tax payers’ money to pay desperate, poor people to converge wherever he goes. He then turns around and speaks with a straight face about how other candidates are not observing SOPs. Does this man have a conscience?

He recently issued directives to police to ensure that no processions take place on public roads. The same man shamelessly watches as NRM hired crowds take to the streets to welcome him in towns. I want to challenge the religious leaders before whom he displayed his hypocrisy to gain the courage to say NO. They must not keep silent at this critical time.

This and more us what I’ll tell Mr. Byabakama tomorrow, before heading out for our Western Region tour in the afternoon. We begin with Kiruhura and Ibanda!