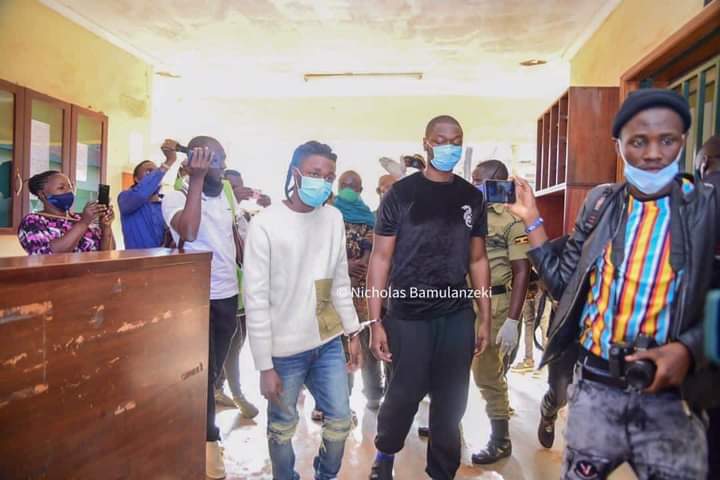 Musician turned politician and presidential candidate Kyagulanyi Ssentamu Robert aka Bobi Wine of the National Unity Platform party has come out to ridicule the government over the arrest of Nigerian artistes Omah Ley and Tems who on Monday afternoon were remanded to Kitalya and Kigo prisons on charges of negligence and committing an act likey to spread the novel Corona virus disease.

Kyagulanyi, an outstanding pillar in Uganda’s music history says the arrest of the Nigerian stars shows that the NRM government is acting on double standards. In a social media brief statement, Kyagulanyi adduces proof of NRM leaning artistes who are well versed with the covid guidelines overtly violating standard operating procedures at rallies and processions they hold to campaign for incumbent president Museveni. Bobi further reveals that being a foreign star, the artiste may perhaps have been unaware of the impending ban on concerts in Uganda.

The arrest of Omah Lay, the Nigerian artist is not about COVID19. It’s an act of shame by a corrupt government that operates on double standards. The artist was booked, obtained a work permit and performed under police protection, why arrest him?

While some Ugandan artists are staging pro-Museveni shows with thousands of people in blatant violation of the same SOPs under the guard of police and the military, a foreign artist is persecuted to cover up the shame.
#FreeOmahLay
#FreeMsTems
#WeAreRemovingADictator

Rudeboy, Davido, Burnaboy among others have all taken to twitter to express their grief with the harassment of their artiste who on Monday was brutally handcuffed in a Ugandan court before being caged in a police van as though ‘he conmitted a murder’ offence.