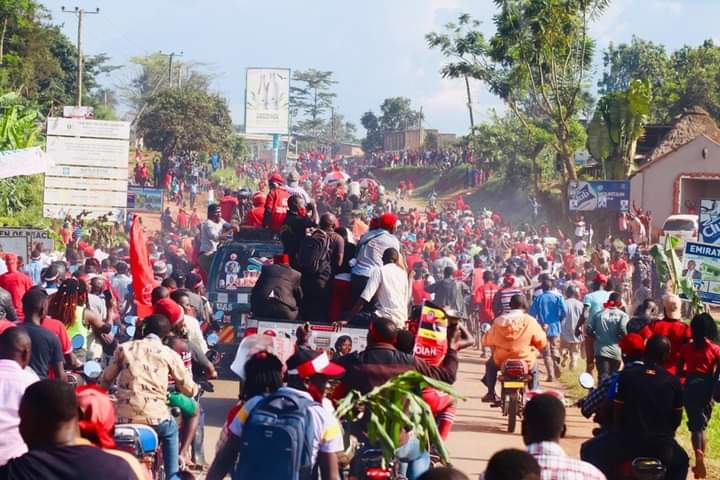 The NUP party leader, Kyagulanyi  Ssentamu Robert who is running for presidency has this afternoon resumed his campaign trail with his birthplace in Gomba district where he has officially flagged them off to festivities.

Kyagulanyi and his entourage suffered multiple blockages by police which erected barricades to delay him from accessing his venue on time. Kyagulanyi in fact reveals that he was kept on waiting for more than an hour as he advanced to Gomba, his birth place. The police without any justification erected barricades and barred him from proceeding to his campaign venue.

“For over an hour, we have been stuck on a roadblock, blocked from accessing Gomba where we are supposed to campaign today by the police and military under the command of Musoni Alphonse the Gomba DPC. No explanation has been given why this is being done.

This is what security has been doing of late to delay us, cut our speed and stop us from reaching our campaign destinations on time,” Kyagulanyi posted on social media.

However, after pressure exerted by his supporters who were gathering in huge numbers, police was compelled to allow him to proceed to his venue. Hundreds of thousands of people followed him in a procession to the rally venue. Kyagulanyi, a born of Gomba is currently preaching his gospel to a vicinity that has been blinded by the lies of the ruling NRM party. Some of the attendants of the rally vowed to support Bobi Wine on the 2021 ballot on grounds that he carries the best dreams for the country. “This young man has a powerful vision for this country,” Mukiibi Alex says. “I will vote for him and I will make sure everyone in my family does the same. I have been a Museveni supporter but now I am for Bobi,” he added.